Newly appointed pontiff Jorge Mario Bergoglio is the first pope to take the name of the Catholic friar known for being a nature lover and preacher to birds. The much-beloved Italian patron saint Francis of Assisi is often portrayed with a bird in his hand. So it could not have been any more appropriate when both a gull and  the Twitter bird were the first two images associated with the world's first glimpse of Pope Francis I?

According to a Guardian report, while the dove is traditionally associated with the Holy Spirit, it appeared like nonetheless divine intervention when a seagull lighted on the the Sistine Chapel's chimney just prior to the emergence of white smoke signaling the selection of a new Pope, as if to deliver a clarion cry. 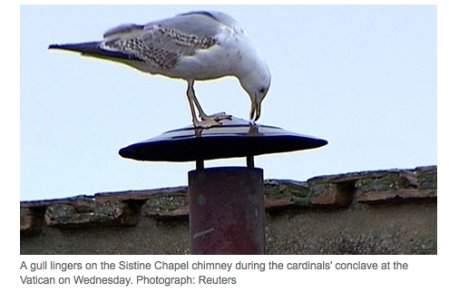 "The name the new pope chooses tells a lot about the thrust of his papacy," said Ambrogio Piazzoni, a church historian and vice-prefect of the Vatican library. Birds were known to flock to St. Francis because of the power of his voice and his ability to relate to a pastoral lifestyle of peace in natural settings. Many already see the similarities and perhaps a foretelling that this Pope's vision is to return a sense of serenity to the Christian ethos, and like his patron saint to repair a Church in dire need of rebuilding.

Manuel Francisco
On a lighter note, a graphic artist chose to the also usher in the Pope with bird -- in a cartoon that included the 21st Century's social media icon, the Twitter Bird. But, instead of this bird lighting on the Sistine Chapel's chimney, editorial cartoonist Manuel Francisco portrays the famous blue bird as the puff of smoke alerting the masses to the news of the new Pope, as if to say, "it's not official, until it's tweeted!" 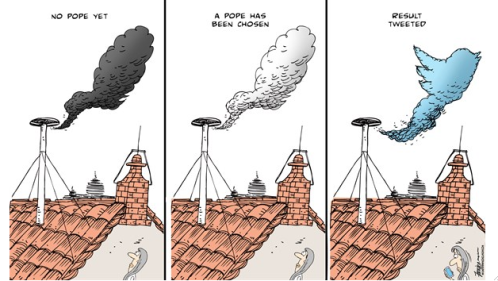 Francisco is the editorial cartoonist for The Manila Times, the oldest existing English language newspaper in the Philippines. His cartoons are syndicated internationally by Cagle Cartoons.

So with the early arrivals of birds landing on the Vatican, it does give hope to many who are wishing for a new type of Papacy - one that is more attuned to the needs of its congregation, and one that will listen more than it delivers dictum and decrees. Perhaps the image of man who can communicate with birds will assuage the masses. After all, the man was a Cardinal before he was a Pope. 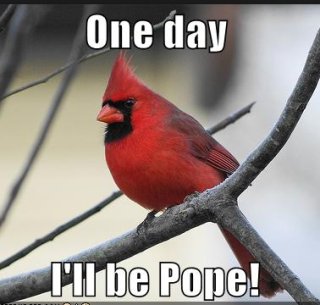 Birds
Fun Stories
News Stories
Reviews
Arctic Birds In South Carolina - What Could Be Fina?
A Photo Gallery Of 15 Eggcellent Bird Eggs
How To Care For Your Wild Birds Through The Winter Season
Chickens Can Be Pets Too?
Comments