The Paradogs of D-Day -- A Historic Tale

People have partnered with dogs in times of war for thousands of years.
No one is quite sure exactly when we took dogs from being soldiers to
parachuting dogs or "paradogs," but this shift happened at some point
early in the 20th Century. When it came to the invasion of Normandy in
World War II, three dogs were dropped in France along with the British
13th Parachute Battalion. 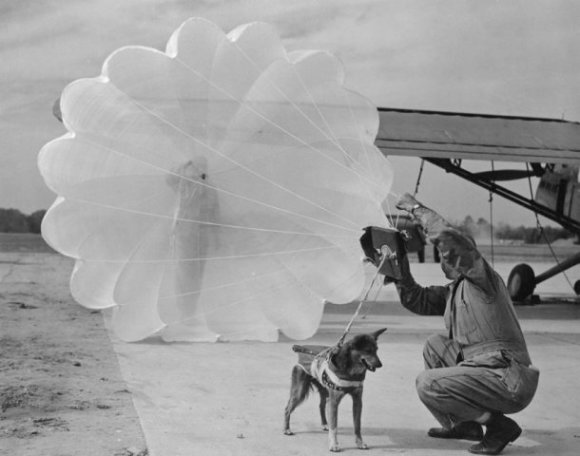 An American Paradog in WWII

Dogs jumping into hostile territory is comparatively commonplace these days. These dogs are actually owned and trained by the military. Back then -- well -- not so much. The British government put out a call for the people to "lend" their pets to the war effort. So many people volunteered their pets -- especially unwanted ones -- that the training school that had been set up for the dogs also became more of a shelter for the dogs. Still, the dogs were trained to locate mines, stand watch, and identify the enemy. As unofficial mascots, they also provided emotional support to the troops. 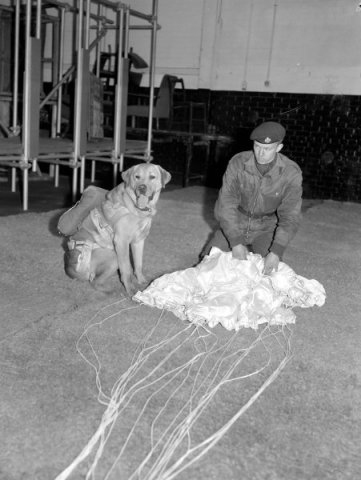 A British Paradog Standing By While a Chute is Packed

While most of the attention to D-Day focuses on the ugly, bloody battle on Omaha beach, there were also men (and dogs) dropping from the air into Normandy. The 13th (Lancashire) Parachute Battalion flew 3 planes over Normandy. Each one held 20 paratroopers and 1 dog. One of these dogs was an Alsatian/Collie mix named Brian. During his military career he was called Bing. The other two dogs, Monty and Ranee, were Alsatians. Ranee was the only female paradog to serve in the war.

*Note: An Alsatian was a German Shepherd. The breed name was changed at the end of World War I because of fears that the word "German" would harm the breed's popularity after years of war with Germany. The UK Kennel Club officially changed the name of the breed to Alsatian Wolf Dog. Many other kennel clubs around the world also adopted this name. It was not until 1977 that the breed name German Shepherd Dog was restored.

Bing was owned by Betty Fetch (an ironic name for a dog owner?) and given up due to the rationing restrictions of the time which made it difficult to care for pets. *spoiler alert* The much beloved dog was returned to her after the war. 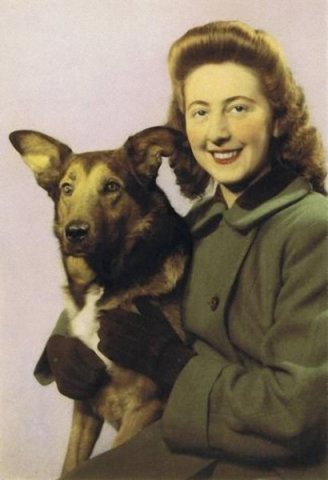 The training for these dogs started with getting used to loud noises, such as aircraft engines. They were also trained to identify the scent of explosives and gunpowder, how to track down enemy combatants, what to do if their soldier was captured, and how to behave in a firefight. It was only after two months of this training that they went on to learn what other military dogs did not: parachuting maneuvers. The dogs were not fed until they were on the ground and the dogs started enjoying the jumps more and more each time they did. 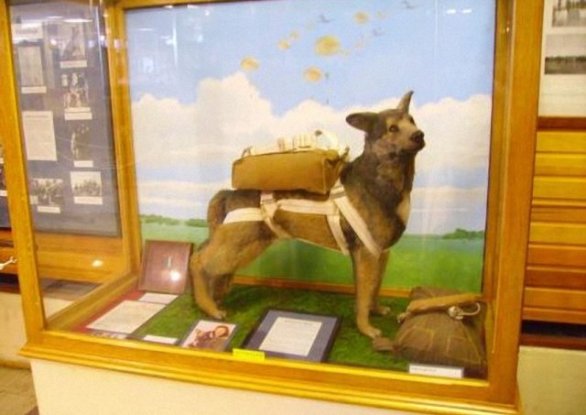 A Replica of Bing on Display at a Museum in Duxfor, England

However, when D-Day came and the planes were over Normandy in the middle of the night, Bing got scared when it was time to make the real jump since there were Germans firing at the planes. He was the last to leave the plane and the jumpmaster had to unhook himself from his radio equipment, catch the dog, and toss him out of the plane. Bing might have sensed that things weren't going as planned -- his parachute got caught in a tree. He hung in the tree for two hours until his human friends found him and got him down. They found that Bing had two deep lacerations to his face from enemy mortar fire. 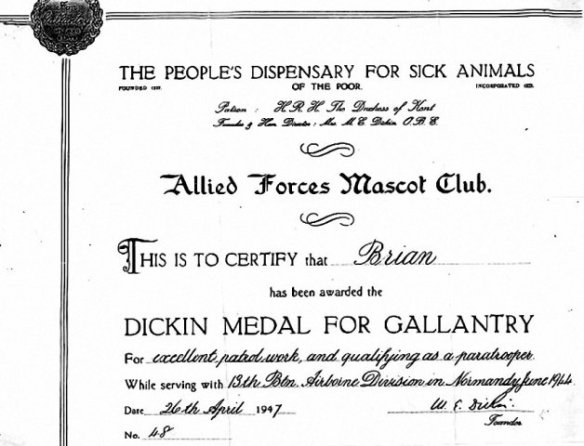 Monty was severely wounded on D-Day and could no longer perform his duties. Ranee was separated from her battalion shortly after landing and was never seen again. Bing, as previously mentioned, survived the war, was returned to his human mom, and was the recipient of The Dickon Medal -- the highest honor available to animals in the UK. He passed away in 1955 at the ripe old age of 13 and is buried in a cemetery of honor for animals northeast of London.

For more information on this amazing group of men and dogs you can read 13 - Lucky For Some: The History of the 13th (Lancashire) Parachute Battalion. To order a copy of this book, click here.

Yes, they also serve, those who serve in fur, and they do it with gallantry.