Polo has long been the sport of kings with a history dating all the way back to the Persians in 5th Century BC. The British are credited with spreading polo worldwide in the late 19th Century with Britain's Prince brothers, William and Harry carrying on the tradition for the Royals today. However while horses have always been the animal most suited for the game, in 1982 the World Elephant Association was established to kick off the first "elephant polo" matches.

The association has its headquarters at the Tiger Tops Jungle Lodge in the Royal Chitwan Park in Nepal, which is where the World Elephant Polo Tournament play every year on a small circuit of Nepal and Thailand. 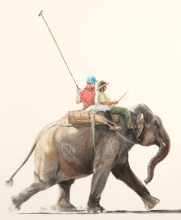 speed of the elephants. Two people ride each elephant - one player and one mahout. While the elephants are steered by mahouts, the player is in control of the ball by directing the mahout as to which way to go.

A team consists of four elephants and are made up from the pool of elephants that are balanced out as fairly as possible taking into account their size and speed.

Approximately 16 elephants participate in the World Elephant Polo Championships every year. Half of the elephants belong to the Nepal National Parks and half belong to Tiger Tops Jungle Lodge. These elephants are trained and maintained by skilled trainers, who often will stay with an elephant for many years. They are well fed and sheltered, and get as much exercise as a wild elephant would - in contrast to zoo elephants that lead a less active life.

And if after reading this post, you are sold on the idea of elephants being a viable substitute for horses in the game of kings, why not other mammals? Well, others have tried. In fact inspired by elephant polo, "camel polo" was launched in Dubai a few years back. The iconic desert-dwelling animals, also known as dromedaries were put to the test to see if they could rival their horse and elephant forebears. But as many of us are familiar, camels are known to have a mind of their own. They can decide to sit down at a moment's notice and as this video displays, the game of control and grace can easily morph into the game of random chaos.

OK, if not camels, how about llamas? Wonder, if they're known for horsing around? 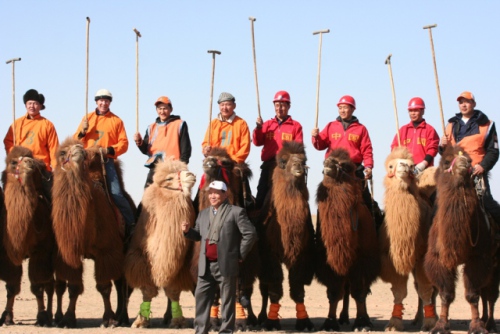