Oysters Could Have Protected East Coast From Sandy

Once upon a time New York Harbor was lined with oyster beds, creating
natural protection to the residents of New York City in the face of
storm surges like the one they recently faced with Hurricane Sandy.
According to 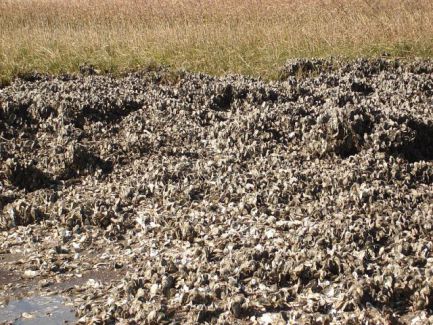 Oyster Bed (Photo by JohnCub/Creative Commons via Wikimedia)Paul Greenberg, award-winning author of Four Fish, oyster
beds would have created an underwater landscape that would have slowed
the wave before it hit the shore.

The theory is that the beds would protect the shoreline much the way that coral reefs do by creating an uneven sea floor that impedes the movement of the wave and breaks it up before it makes it to shore.

Habitat destruction and pollution destroyed the oyster beds that once protected the coastline from Washington D.C. to Boston.  Efforts are underway to restore the oyster beds, but it is a project that will take some time.

Greenberg advises the installment of a lot more oyster beds. With a new nor'easter heading their way this week, they'd better work fast. The storm that is expected to pack winds of 55 mph may hit the New York and New Jersey coastlines already decimated by Sandy as early as Wednesday.

Lost Penguin Expected To Be Home For The New Year

Would Your Cat Make A Bed In This Beehive?