Jack Saves Kitty From Coyotes: The Other Side of Pit Bulls

Pit bulls have gotten a really bad reputation over the past couple of
decades and it has led to numerous communities banning the breed. While
some of the dogs have shown aggressive and even violent tendencies, 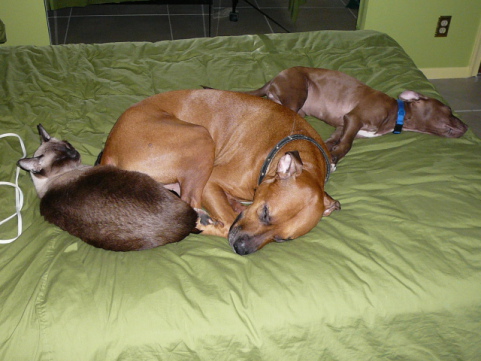 Compatible Cat and Dog (Photo from Creative Commons via Wikimedia)they
can also have a sweet, caring side that gets far less press. This has
led to many debates over whether it is really the dogs or the owners
that are at fault. Last October a pit bull named Jack saved Kitty, the family cat, from an attack by coyotes.

Both Jack and Kitty are rescue animals living in the same home in Florida. The pair has chosen to overlook the difference in their species and be the best of friends. Owner Sheree Lewis says that Jack apparently thinks that he is Kitty's caretaker and checks on her every day and sniffs her over to make sure everything is okay.

Jack had his dedication to taking care of Kittywas put to the ultimate test last fall. Lewis was leaving the house one day when she noticed two coyotes out in the fighting over some prey that had been caught. In every pet owner's worst nightmare she realized that the prey was Kitty. One coyote had her by the neck and the other by the tail.

Before Lewis could react, Jack was out the door, racing to the rescue, and on the coyotes. The coyotes dropped the cat to take on the angry pit bull. As soon as possible, Lewis rushed in and grabbed Kitty and rushed her to the vet. She was badly hurt but alive. Aside from multiple lacerations and a broken tooth, Kitty also had brain swelling.

Kitty has made a miraculous recovery, though she still has some trouble walking. Jack rarely leaves her side, always on guard to keep her safe. According to Lewis Jack knew exactly what he was doing when he rushed into the fray. He wasn't just being territorial. He was saving his best friend's life.

"Jack is a hero," Lewis averred. "He saved the kitty's life and he just shows how good dogs can be. Big dogs can protect you, especially if something like this happens."

We should all be lucky enough to have a friend like Jack.

In DC, Pets Are A Low Class Yokel Embarrassment