Elijah Gets A Home For Christmas: The Other Side of Pit Bulls

Back in October an injured pit bull that was near death was rescued by
Andi Davis as she was hiking on a mountain in Arizona. Her heart
immediately went out to the animal and she picked up the 47-pound dog
and 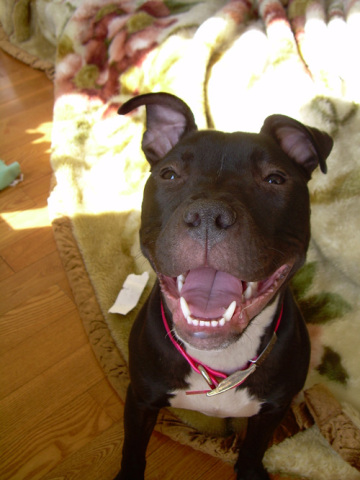 American Pit Bull Terrier (Photo by Kennethhung/Creative Commons via Wikimedia)carried him a half mile down the mountain. Then she took him to the
Arizona Humane Society where they discovered that he had been shot.

There was a wound in the left side of the dog's chest. In an x-ray bullet fragments were found in his shoulder and a bullet was lodged in his neck.

Davis couldn't stop thinking about the dog she had rescued and neither could her family. Davis's ten-year-old daughter, Jessica, said that her heart broke at the sight of the torn up dog. It didn't take long for the family to decide that Elijah, as he had since been named, was meant to be a part of the family.

Like so many people, the Davis family was once afraid of the pit bulls after all of the bad press the breed had gotten. They took Elijah into their home as a foster animal even though for months vets were unsure whether Elijah would actually be able to recover from his wounds. It looked like he might even lose a leg.

The road to recovery will come to an end today when the Davis family formally adopts Elijah and he becomes a part of their family forever. He may not be a cat, but Elijah is one dog who managed to land on his feet.

Christmas
Dogs
News Stories
Rescue
The Goat's Christmas Animal Video Of The Day!!!
Santa Better Keep an Eye on these Reindeer -- The "We Love Hallucinogens" Animal Video of the Day!!!