Abby Saves Neighbors From Fire: The Other Side of Pit Bulls 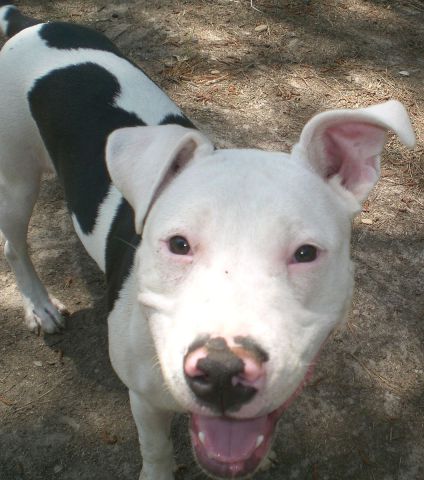 American Pit Bull Terrier (Public Domain Image))really the dogs or the owners
that are at fault. In 2012 a black and white pit bull named Abby was credited with saving the lives of her neighbors.

Abby's human, Vernon Lile, who lives with her in Ionia, Michigan, said that Abby had started barking and wouldn't stop. He had never heard her barking like that before, so he went outside to see what might be bothering her. He found the neighbor's porch ablaze. No wonder Abby was so agitated!

He grabbed a bucket and trash cans to try and put the fire out, but it was too big. Lile started pounding on the windows to wake the residents of the house from their sleep.

Joe Andrews, one of the residents of the house, was finally roused by Lile's clamor and Abby's barking. He looked out the window and saw the fire. He, too, tried to throw water on the fire before realizing that it was just too big. He and the other occupants of the house were able to escape the blaze unharmed.

"Pit bulls get a lot of bad press, but if it wasn't for (Abby's) barking, I don't think I would have come outside," Lile said after the incident. In addition to receiving credit for raising the alarm about the fire, Abby also received extra treats and hugs for her good work.

Abby was just doing what dogs have been doing to humans for many centuries -- alerting them to danger that humans aren't able to notice soon enough. Andrews was asked if he and Abby were friends and he responded that they were now -- without a doubt.