Titan Rescues Human Mom: The Other Side Of Pit Bulls 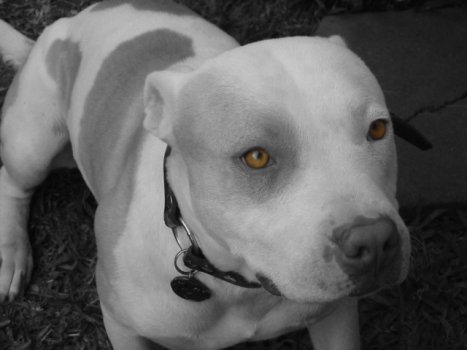 American Pit Bull Terrier (Photo via Creative Commons via Wikimedia)really the dogs or the owners
that are at fault. In 2011, Titan saved the life of one of his owners after she had collapsed in the bedroom.

John Benton of Atlanta was trying to go to work one day but Titan wouldn't let him leave the house. The dog was barking and making agitated circles in front of the door, blocking the way. It dawned on Benton that the dog had something on his mind and decided to follow him to see what was up.

Titan led Benton back upstairs to the bedroom. There he found his wife, Gloria, lying on the floor bleeding from the head. She was rushed to the hospital where it was discovered that she had suffered a brain aneurysm. When she collapsed she hit her head and fractured her skull.  Doctors told Benton that if Titan had not alerted him to the situation Gloria very well may not have survived.

Titan was later honored with a Neighbor of the Year Award by the Vintage Pointe Neighborhood Association. Not only was Titan the first dog to receive the award, he was also the first male.

Want To Live Longer? Scientists Say Get A Dog
Pet Couture: Now Your Dog Can Match Your Kilt
Two Approaches To Preventing Dog Pee Spots On Your Lawn
Comments