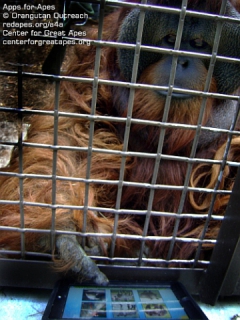 Orangutan checking out the iPad apps: © Orangutan Outreach, image via thinkdigit.comI hate it when apes get to use technology before I do. But indeed, an organization called Orangutan Outreach has deployed iPads fo several orangutan houses in zoos across North America through its Apps For Apes program.  And, of course, apes are loving them.  They even use iPad's FaceTime to communicate with each other face to face.

Richard Zimmerman, founder and director of Orangutan Outreach, came up with the Apps for Apes idea after seeing Steve Jobs introduce the iPad in 2010. Zimmerman thought the iPad would be great for orangutans, who had already showed some prowess using other electronic interfaces.

Though zoo orangutans are very active in warmer weather, they go for long periods in winter, especially in cold climate zoos, when they are indoors, counter to their natural habitats.  This isolation not only leads to boredom, but it can stunt their social growth, according to Zimmerman.

"They need stimulation, especially indoors," Zimmerman told Yahoo News.. "The zoo keepers can see the benefit from this sort of enrichment."

It seems that female and young orangutans take to the iPads more readily than the older males, who tend to see them as threatening, but when the older males do take to them, there's a big change in their behavior towards being less stand-offish, even with zoo visitors. 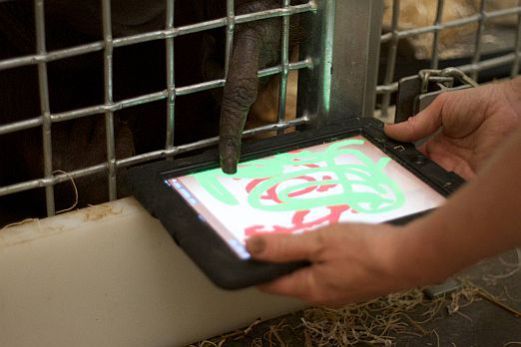 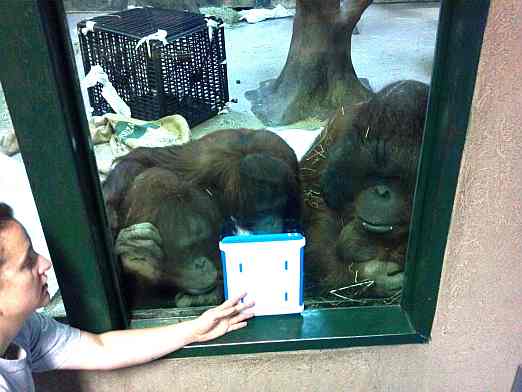 The initial iPad apps being introduced to the orangutans are simple, much like those that mimic their physical enrichment items; things like drawing, playing music, and tapping on moving objects. When they do use iPads, humans are holding them, to prevent the orangutans from being destructive, intentionally or not.

As of now, Apps for Apes has been deployed at the Milwaukee County Zoo, Toronto Zoo, Center for Great Apes (in Florida), Houston Zoo, Utah's Hogle Zoo, Zoo Atlanta. Zimmerman told ThinkDigit that soon iPads will arrive for orangutans at the National Zoo in Wash DC, Oregon Zoo, and the Auckland Zoo in New Zealand.?  Also, he his hoping to expand to France, Spain and other interested zoos throughout the world.

And yes, the apes will get to have their social networks as soon as Orangutan Outreach gets more camera-enabled iPads.  For now, the group has set up an experimental program called Primate PlayDates, including some chimpanzees. So far, there's been a PlayDate on FaceTime between the Milwaukee County Zoo and the Toronto Zoo!