It's odd the collaborative online research conducted by Edmunds.com and Bark-BuckleUP in its "Top Ten Pet-Safe Vehicles" rankings released on March 5, 2013, omitted an obvious contender. In my post, "Canines Motor Minis…Meet World's First Driving Dogs," I reported on the Auckland SPCA's successful program dedicated to teaching dogs how to drive cars. One would have to wonder if the British-made Mini Cooper Countryman was good enough for a dog to drive, why it wouldn't have made it to this TOP TEN list?

According to a CBS report, while there are many rankings to determine how safe cars are for drivers and their human passengers, they often leave their pets at risk.

“Not only are these vehicles safe for pets, but they also offer a certain measure of convenience for pet owners,” said Edmunds.com Automotive Content Editor Warren Clarke. “And with each one of these vehicles starting at under $35,000, owners won’t have to chase their own tails to make ends meet.”

The top ten pet-safe vehicles selected by Edmunds.com and Bark-BuckUP breaks down in alphabetical order,

According to Edmunds.com, their research concurred that most drivers aren't taking the necessary precautionary steps  to ensure pet safety. Most animals ride unrestrained, increasing the risk of pet injury or fatalities during an accident.

If you have an accident at 35 mph while toting your 60-pound unrestrained dog, your pet is capable of causing an impact of up to 2,700 pounds, slamming into the seat, the windshield, or even a passenger. If your unrestrained pet survives the crash, "Fido or Fifi may impede or slow the progress of rescue workers, who'll need to secure the traumatized animal before treating human victims," noted the report.

Seems to me that if the Auckland SPCA deemed the Mini Cooper Countrymans safe for pets, particularly  since their dogs were put behind the wheel (no longer passengers), why the slight in not listing those cars in this TOP TEN? Perhaps it had something to due to the 'driving dog's  latest updates. When dog trainer Mark Vette was asked how his mixed-breed rescue dogs "Monty" and "Porter" performed in the driver's seat, he noted that while Monty handled "the straightway flawlessly --Porter, assigned to steer around a bend, ran off the road." Oh, well, I guess it's back to Drivers' Ed! Better luck next year, Porter and the Mini Cooper! 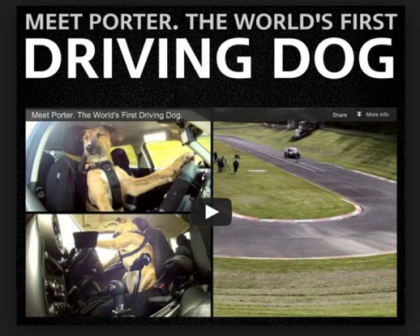 Animals These Friends Of Mine Love
Comments