While NBC's coverage of the Olympics was extensive over the course of the last few weeks, it did miss the boat in failing to report on the "feline" athletes who've achieved some major online feats. With stories surfacing on both The Daily Dot and Mashable, Nicolas Longtin's photoshopping exercise on Flickr should take the gold for its ingenuity and timeliness.

Nicolas LongtinThe 20+ furry Olympians that Longtin posted to the popular photo-sharing network address almost every conceivable Olympic sport. He notes that the idea came to him when he was watching "a particularly athletic display by (his) cats, and as they were vaulting from place to place in my living room it struck me that they resembled tiny, furry four-legged Olympians." From there, he employed his excellent photoshop expertise to affix cat's heads onto the athletic bodies of some of the now world-famous Olympians.

This iconic photo using the body image of Gabrielle Douglas was selected by the 34-year web marketer from Minneapolis because "Gaby is one of the few human beings capable of rivaling the raw athleticism of cats -- she is simply amazing, and my cats are quite envious." 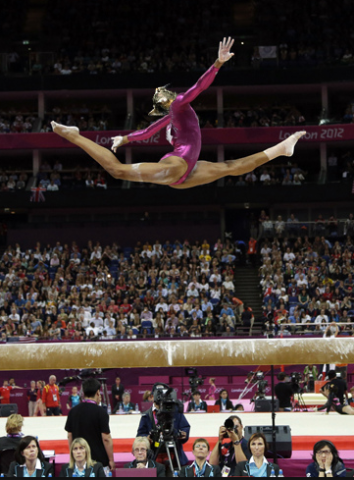 Cat head on Gabby Douglas' Body
Here's another that positions a top-hatted cat going "Dressage" on one of the Olympic steeds at the 2012 games. 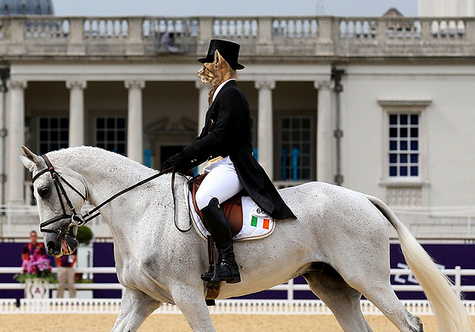 Not sure if this is Mitt Romney's wife's horse?
After initially posting his furry cat-letes to Flickr and while Mashable reported only 16,000 views at the time, Longtin told me today that he's scaling past 200,000.  “It was a big surprise to me when the photos started to become popular,” Longtin said. “I was sharing them with my friends through social media sites but I don’t have a huge network. I enjoy the Flickr community tremendously, especially the community photo pools.”

He also reported to Mashable that "most of the cats in the photos belong to family and friends, and his two cats are featured frequently." In fact his "younger cat Cachi made a great weightlifter and his older brother Memo competed in Judo,” added Longtin.

Memo & Cachi - Nicholas Longtin's cats
As far as similar projects on the horizon, Longtin reflects: "I’ve gotten a lot of great comments and feedback and I'd love to do full motion video clips as well but the processes is much more time consuming so it may have to wait until the next Olympics.” One can only imagine the work required to attach cat heads to moving images. Stay tuned - will report back when Longtin's film productions are ready for prime time! 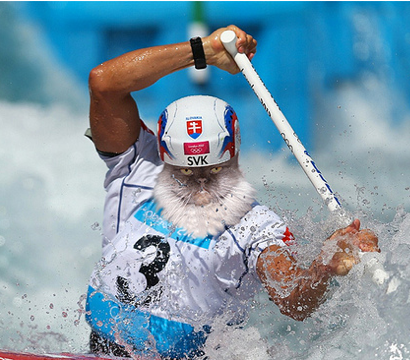