Not every airport is out there adopting a cat, but back in 2007 a stray
tabby cat was seen wandering near Olympic House, the main administration
building at the Manchester Airport in England. Office staff and flight
attendants fell in love with the scruffy guy with the torn ear. They
dubbed the ginger and white cat "Olly" for Olympic House and took up a
collection to buy him is own "executive lounge" (luxury cat box). 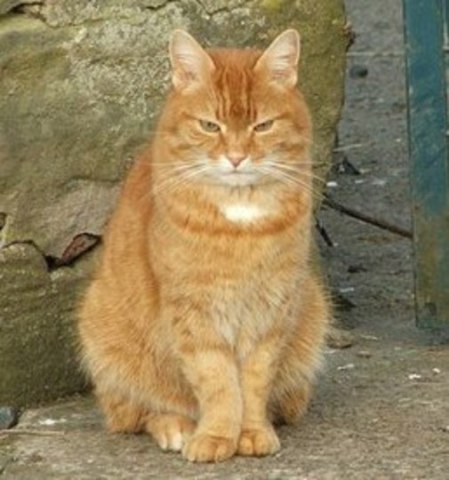 Everyone began working together to make a life for Olly there at the airport. Air crews would feed him early in the morning. Staff from the airport, airlines and other service providers would look after him throughout the day. Some workers would even go in on their days off to make sure that Olly was fed and cared for.

The bosses weren't as keen on having Olly around as everyone else and in 2008 word got out that they were planning to move the cat on. Hundreds of people signed a petition demanding that the tabby be allowed to stay. Comments of indignation against such a plan poured in from around the world. Management finally gave in to the pressure and granted Olly permanent asylum at the airport.

Olly was not done surprising the world though. In 2009 a routine trip to the vet showed that the airport staff had made a serious error about the cat. He was not who they thought he was. He was a she. The shocked staffers quickly changed her name to Olivia. Habit being what it is, they continued to call her Olly. 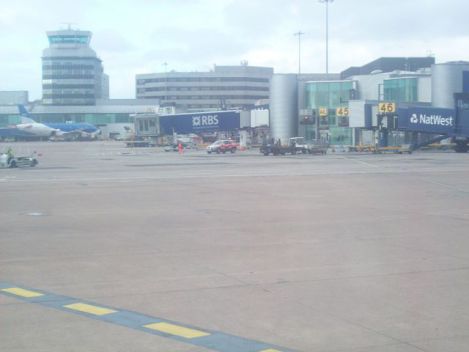 Manchester Airport With Olympic House in the Background (Public Domain Image)Strangely, the staff feels that in knowing this fact they now find her more cuddly and loving than she had been. If anything, the gender shift made her even more popular than before.

A secret admirer was even sending her postcards from his or her trips all over the world, including a Christmas card from Venice in 2010. No one ever discovered who the sender was. A phone number included on each card was called, but there was never an answer. It could have been any one of the 19 million passengers who passed through the airport each year. From the messages written on the cards it was definitely someone who actually met the little moggie (British slang for cat). 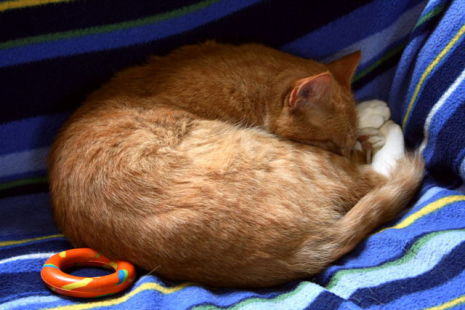 Ginger and White Tabby Cat Sleeping (Photo by Curled/Creative Commons via Wikimedia) the name of the plane. Her name was painted on the plane just below the cockpit. The airline has since been sold and the name removed from the plane.

Olly was finally displaced from the airport in 2011 when concerns for her safety and well-being during major reconstruction on the airport. A number of options were considered for her, including moving her to the runway visitors' park, but it was decided, with advice from animal welfare experts, that as she was aging, a proper home would be best in the long run.

She has since been relocated to a nice "retirement home" at an undisclosed location in Manchester. While she no longer engages is public life, she does have her own Facebook page to keep in touch with her many friends. Even after living the adventurous life of an airport cat, Olly has taken well to living the proper life of a petted and adored pussy cat.