Oh, The French! Their Bees Are Producing Blue & Green Honey

Nom, nom.  Ooh, la la!  C'est magnifique!  Well, maybe not, according to the French bee farmers whose bees got into some M&M colored syrup and produced blue and green honey.... 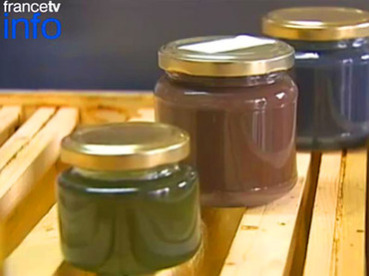 Apparently, the bees in Ribeauvillé, in the Alsace region of France, sniffed their way into a processing plant where M&M waste was being processed.  The waste had been delivered from the nearby Mars factory, where M&Ms and other Mars products are produced. 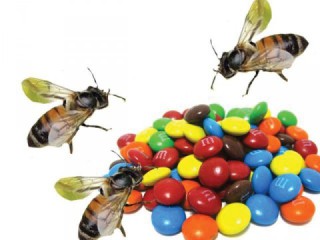 Bees love their M&M's too!: image via nation.com.pkUnfortunately, M&Ms are considered junk food for bees as well as humans, and the bee farmers won't sell the green and blue honey, even though they say it tastes just like honey.

Now that they've lost a lot of money on the M&M bees, how will they recoup that loss?  How will they help these bees fight their addictions to processed sugar?

The first step in breaking the addiction is to put a lid on the M&M waste, which the waste processing plant has agreed to.

Then...  Are there rehab centers for M&M addicted bees? Soon the bees will have to wonder "Where have all the flowers gone?"

sources: LiveScience via Fox News, France 24, and thank to Creature Features who sent me this tip!

Silver Spoon Sunday: The Benefits Of Bees
20,000 Bees! The Swarming Animal Video of the Day!!!
Give The Gift Of An Animal This Christmas: Heifer International
Comments