As the whole world learned of the devastating terrorist attacks inflicted on the Charlie Hebdo’s office in Paris, little 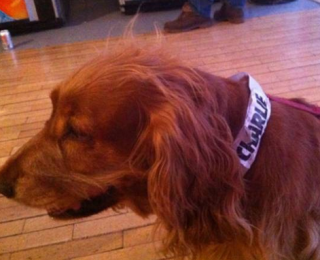 was reported about the affects on one lone canine. Actually it wasn’t until January 16 that France’s Le Monde newspaper released a very heart-warming story of an unreported survivor of the shootings.

It was on that date, that crime reporter Sigolène Vinson posted a story about the office mascot, named Lila. This pooch was fortunate enough not to be in the line of fire when the Kouachi brothers killed 12 of her colleagues. The Cocker Spaniel, who wears a Charlie Hebdo collar had greeted the staff that morning, but when the gunfire began on January 7th, she was was wise enough to "run from room to room," noted Vinson who also survived the shootings.

Racing between the bodies of slain cartoonists who normally offered her treats, Lila, the red-haired house dog, was the silent witness of their executions by automatic weaponry.

One of the gunmen told Vinson he wouldn’t kill her because she was a woman, and she kept still behind an office wall until she heard them flee. “As I lay there, not sure if they were really gone, shots rang out in the distance, in the street. And then I heard Lila with her tiny steps,” Vinson said. She thought Lila was searching for her favorite cartoonist, Jean Cabut, who was killed.

When the gunmen left, the first thing Vinson saw in the newsroom was her colleague

Philippe Lancon, whose right cheek had a deep bullet wound. She was unable to help, immobilized by shock.

In the January 14th sold-out edition of Charlie Hebdo, Vinson wrote an Ode to Lila. It read in part, “At Charlie

Hebdo, we have a dog, a red Cocker Spaniel who signals to us that it's OK, that we can get up now, that (the terrorists) have gone."

She adds, with a touch of cruel irony: "Lila was spared, perhaps because she is a female." Je Suis Lila!

Dog Rescued With Kitten She Rescued