It's not every day that you see an octopus walking across the ocean
floor upright on its tentacles. It is even rarer to see one carrying
two halves of a coconut shell with him as he goes. I mean, when you are
out on the road and can't find a motel vacancy for miles one of those
shells can come in really handy -- that is if you are an octopus. 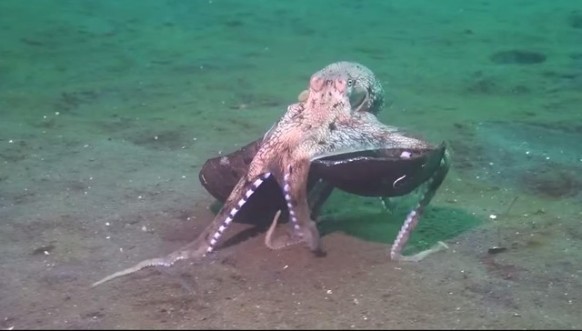 Octopus with Portable Shelter (Image via The Dodo)

Octopi have long been known to be extremely intelligent but who would have guessed that they would have the foresight to take shelter with them while traveling? This particular octopus was caught on camera carrying the coconut shell halves in his "arms" as he "walks" across an area of the ocean floor that provides no place for him to hide. When he detects the necessity to lower his profile he neatly nips inside the shell and closes it around him.

Scientists say that this is the first evidence of tool use by an octopus, which adds the critter to a very small group of animals that use tools. This delightful finding was nearly lost to the world of science though.  Julian Finn, the researcher from the Victoria Museum in Australia who discovered this amazing new fact, was nearly killed by his finding. Yep. He almost drowned laughing over the unusual sight.

"I almost drowned laughing when I saw this the first time," Finn told the BBC. "I could tell it was going to do something, but I didn't expect this - I didn't expect it would pick up the shell and run away with it."

It makes you think that the next thing we are going to find out is that his real home is a three-bedroom, split-level rock crevice with hot and cold running shellfish.

The Truth About Dog Lovers -- On A Mug!