No Bird, No Problem: Ten Ingenious Ways NOT To Serve Turkey This Thanksgiving

Ex-Beatle and ex-carnivore Sir Paul McCartney wants us all to “eat no turkey” this Thanksgiving but face it, the other big bird's become the centerpiece of holiday dinners in more ways than one. Options (serious and otherwise) are available, however, and these 10 non-gobbler goodies preserve the spirit of the celebration without ruffling anyone's feathers. 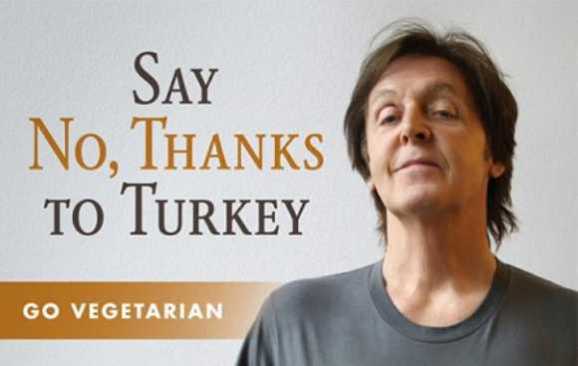 OK, so Hormel's Turkey SPAM is made with “100% White, Lean Turkey” but it's about as opposite from the traditional baked bird as one can get and besides, the odds of Sir Paul popping in for a bite are rather low.

It's noteworthy that Hormel suggests using this product to “add a touch of SPAM® tastiness to your Thanksgiving stuffing”... noteworthy because that may be the only time you'll see the words “SPAM” and “tastiness” in the same sentence. (Turkey-less Thanksgiving image via Jeanne Martin you can buy Turkey Spam for cheap here)

Jones Soda began offering their, er, unique line of holiday flavored sodas in 2003 with the highlight being Turkey & Gravy. Possibly (OK, probably) based on the novelty value, this sludge-colored Thanksgiving blend proved wildly popular, especially when sold in Jones' combo packs which included other complementary flavors such as Sweet Potato, Dinner Roll, Pea, and Antacid.

We're not sure exactly how much Tofurky & Gravy soda Jones actually sold that year but at least they were nice enough to donate portion of the proceeds to the PAWS, the Progressive Animal Welfare Society. (Turkey-less Thanksgiving image via Ted Murphy, the 2012 version of Jones holiday soda with all new flavors is now available here)

Veggieducken is a meatless take on the traditional Turducken that's not only turkey-free, it sounds a lot better than a food whose first four letters are t, u, r and d.

Be sure your guests are vegetarians, though, as serving a dish made with yams & leeks stuffed into a humongous banana squash to non-vegans could be dangerous to the chef's health. (Turkey-less Thanksgiving image via The Sporkful)

So your magnificent roasted holiday turkey has perfectly crispy skin... eww, turkey skin, gross! Now you can get all the crispiness while leaving the skin to those disgusting pork rind aficionados thanks to Roasted Turkey Doritos.

Give the bird the bird this Thanksgiving and tantalize your guests (or yourself) with a heapin' helpin' of Roasted Turkey Dorito nachos! Difficulty: they look like Christmas trees and are only sold in Taiwan. (Turkey-less Thanksgiving image via LOLWOT) 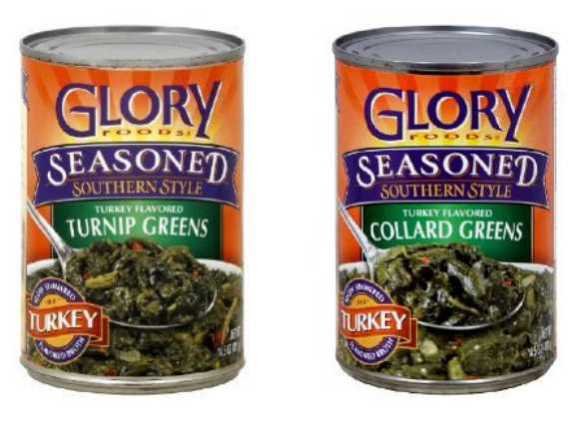 Do the fine folks at Glory Foods think that turkey-flavoring their canned turnip greens and collard greens will make these wholesome veggies more appealing to fussy kids... or for that matter, ANY kids?

Stretching your budget this holiday season? Hey, aren't we all... and Thanksgiving Gumballs make it that much easier! Each tin contains roughly 22 Turkey, Cranberry and Pumpkin Pie flavored gumballs.

Eat 'em singly, together, or mash up hundreds of the l'il fellers to form a roast turkey shaped conglomeration. It fooled the Tasmanian Devil so tricking your in-laws is a cinch! (Turkey-less Thanksgiving image via Arachnos Commander!, you can get your own gumballs here)

What starts with T, ends with “urky”, and can feed a family of five even if they're Vegans? Tofurky, of course! This meatless meal from Oregon's Turtle Island Foods is made from seitan and soy – a blend of wheat protein and organic tofu scientifically programmed to approximate the look, feel and taste of actual turkey. 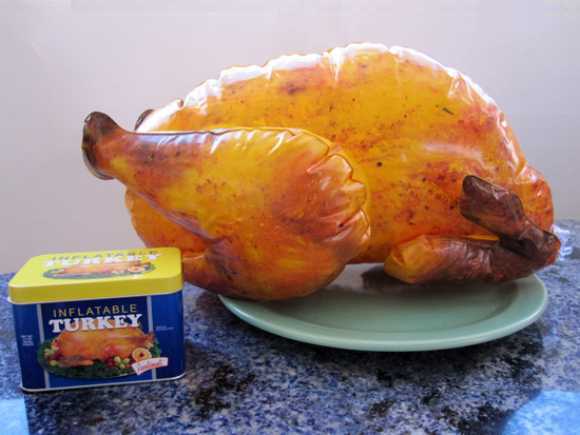 Can't stand turkey but believe in keeping up appearances? Then pump it up, until you can feel it with the incredible Inflatable Turkey!

The 16" long inflatable vinyl turkey looks so realistic, odds are your drunken uncle will stab it with a fork in no time flat – watching it zoom around the room is worth the price all by itself. (Turkey-less Thanksgiving image via NeatoShop)

Speaking of holiday spirits, the party really gets rolling once the bottle gets opened. Ahh yes, Wild Turkey, the only turkey that can cause a blackout without the use of outdoor overhead electrical wiring and wayward wild turkeys. While Wild Turkey on its own makes for a miserable holiday dinner, things could be worse... you could be having it for breakfast. (Turkey-less Thanksgiving image via RachidH)

Surviving Turkey Toms, Dicks and Harrys nationwide will breathe a sigh of relief once Thanksgiving's over – one imagines the dawn of Black Friday is like Christmas morning for our feathered friends. Those of us not sleeping off the tryptophan can give themselves a small pat on the back as well knowing the previous evening's Thanksgiving feast didn't cost the life of a beast.