Until the publication of Professor Xu Xing's findings this week in the journal Nature, the last living dinosaur discovered with feathers was the Beipiasaurus, which lived about 125 million years ago. Now Xing's newest feathered discovery, found in the same region of Liaoning Province in China, is about 40 times larger than the man-size Beiplasaurus, and has been named Yutyrannus huali, "beautiful feathered tyrant." 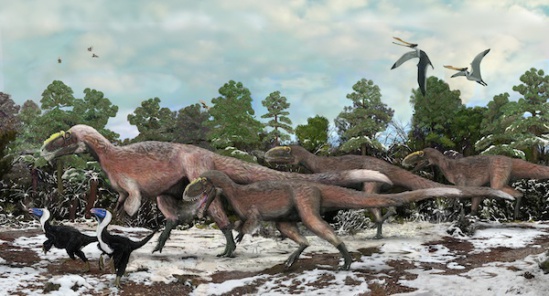 Artist impressions of the Yutyrannus and the Beiplasaurus: image via blogs.discovermagazine.com/

Xing, along with other Chinese and Canadian paleontologists, studied the fossils of the 30-feet, 3,000 pound dinosaur, parts of which had been discovered by Liaoning's farmers, and they put the large, heavy pieces together.  When they finished the giant puzzle, what they saw was two dinosaurs facing in opposite directions, both having feathers on their bodies, but not all over their bodies. 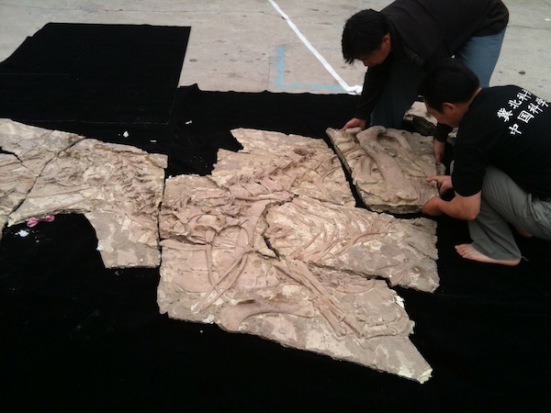 Fossil puzzle of what was to be named the Yutyrannus: image via blogs.discovermagazine.com/

Artist rendition of the Yutyrannus: image via blogs.discovermagazine.com/

"The feathers of Yutyrannus were simple filaments," explained Xing, a scientist at Beijing's Institute of Vertebrate Paleontology and Paleoanthropology.  "They were more like the fuzzy down of a modern baby chick than the stiff plumes of an adult bird."

"The idea that primitive feathers could have been for insulation rather than flight has been around for a long time," said Dr Corwin Sullivan, Xing's Canadian colleague. "However, large-bodied animals typically can retain heat quite easily, and actually have more of a potential problem with overheating. That makes Yutyrannus, which is large and downright shaggy, a bit of a surprise."

Indeed, other large dinosaurs living around that time, like the T rex, did not have any feathers, but Xing suggests that the Yutyrannus was living in a more northern climate than the others and may have been evolving with fewer feathers as the climate warmed.

Tush Wars: Which Animal Has The Cutest Posterior?
Comments