No, neither mammals nor indigenous peoples have been able to figure out cloud computing yet. But they do inhabit the same cloud forests of Colombia. They are an odd couple in that one was first discovered by the Spanish conquistadors in the 1500s while the other was just uncovered August 15, 2013 as the first new species of carnivore to be identified in the Western hemisphere in 35 years.

Colombia is home to approximately 80 indigenous tribes with more than 700,000 members. One of the smaller indigenous groups is the U'wa which now numbers only 5,000 people, and reside on their ancestral ground in Colombia, near the Venezuelan boarder. 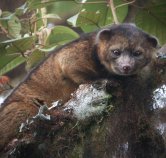 The olinguito (English pronunciation: oh-lihn-gee-toe), which is Spanish for "little olingo", is a mammal of the genus Bassaricyon in the family Procyonidae (the raccoon family) that also inhabits the cloud forests of Colombia.

The U'wa rotate their crops, but let their fields lie fallow to allow the replenishment of native plant and animal species, in an effort to avoid cutting down larger trees. The unspoiled parts of the region have some of the greatest biodiversity anywhere. In addition to the newly found olinguito, other cohabiting resident species include toucans, anacondas, jaguars, and spectacled bears.

To demonstrate how new the olinguito discovery is, if one was to Google "U'wa and Oliguito" you would not find any online content to indicate how the tribe and mammal have been getting along over the years. Hopefully this blog will spur on some sociological studies of those who are in the field and following the co-habitation activities of both species.

Kristofer Helgen"The discovery of the olinguito shows us that the world is not yet completely explored, its most basic secrets not yet revealed," said Kristofer Helgen, curator of mammals at the Smithsonian's National Museum of Natural History and leader of the team reporting the new discovery.

The species does not seem to be endangered, Helgen said. However, they are still somewhat elusive to the team.

"We have very little first-hand info coming to us about places in Columbia where we can find olinguitos right now today."

threat to the U'wa's land. Presently Occidental Petroleum is expanding their oil production and is pushing to expand across 260,000 acres of cloud forest with a new network of pipelines.

In a recent Audubon Magazine post by Chris Chang, titled, "A Leap of Faith," in protest, the U'wa tribe has threatened to commit mass suicide if an exploratory oil well is drilled on the homeland they consider sacred. Remarkably, a suicide of this nature would be an act with precedent. When Spanish Conquistadors tried to enslave the tribe in the 17th century, scores of U'wa walked off the top of a 1,400-foot precipice now known as the Cliff of Glory.

Even though both the U'wa and olinguitos live out their lives, removed from civilization at large, there is no reason their ecosystems should be so threatened. More attention needs to be exposed by the public to protect them both, so they can cohabit in the clouds, way into the future. One might think that these forests as remote and high up in the Andes as they are would not have infringements of this magnitude occurring. But they are.

So, please join with the various activist groups such as the Rainforest Action Network and Amazon Watch to support their efforts in defending the environmental and indigenous peoples' rights of both this ancient people and the world's newest mammal.