A new count of the island scrub jay showed that there are fewer of the
birds than previously thought. The new calculations make the bird one of
the ten rarest songbirds in the United States. Previous work had
overestimated their population by as much as 500 per cent, according to
an article of the October issue of 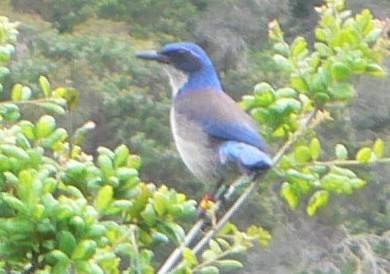 The bird, with brilliant blue plumage, lives only on Santa Cruz Island off the coast of California.  Despite this correction in the numbers, the bird is slowly coming back now that non-native animals such as pigs, cows, and sheep that destroyed their habitat have been removed from the island. The birds live in areas that are dominated by scrub oak trees.

Because of the new numbers, the birds have been moved from being classified as near-threatened to vulnerable by the International Union for Conservation of Nature. Continuing threats include limited island range, lack of genetic diversity, West Nile virus, and the loss of the scrub oak due to disease and wildfire.

Birds
Conservation
News Stories
Wildlife
Who Will Win The War On Foie Gras? The CHEFS Or The Ducks
Why Did The Chickens Cross The Street? Only "Omlet" Knows (w/video)

Hibernate In Winter, Estivate In Summer: Which Animals Do What?
The Animal Myths Video Of The Day!!!
Comments