There are a number of reasons that you may need to fly with your dog as
an airline passenger instead of as cargo -- from service dogs to best
buds. Flying can be a stressful experience for dogs -- the airport
crowds, security checks, and turbulence are only a few of the issues
that face them when traveling. Now Air Hollywood, the world's largest
aircraft-themed film studio, is offering classes to train dogs to handle
air travel calmly and appropriately. 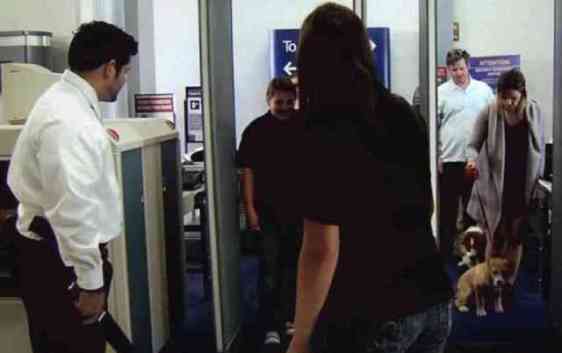 Dogs Learning to go Though Airport Security (You Tube Image)

In the class the dogs are exposed to real life air travel experiences in a controlled environment. There are stages set up to be waiting areas, screening areas, gangways, and the interior of jets. Extras and actors are hired to portray crowds, other passengers, and employees. Even turbulence is experienced in an aircraft simulator. 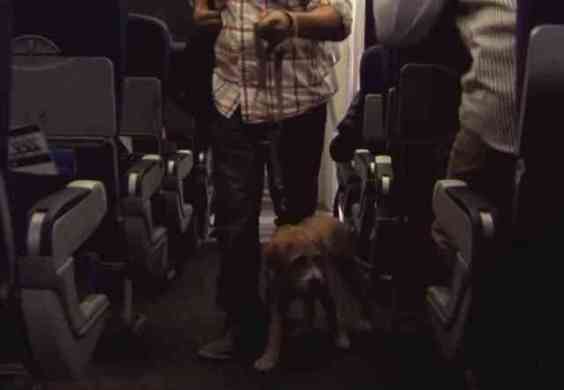 Dog Being Trained for Air Travel (You Tube Image)

Talaat Captan, president and CEO of Air Hollywood, came up with the idea after witnessing a dog owner struggling with a dog that didn't want to go through airport security. The owner was freaking and so was the dog. So he thought, "Why don't I train those people?"

Captan started his company back in 2001, just a few months before 9/11. On 9/12 his phone began ringing off the hook as film companies and television studios were scrambling to meet shooting schedules during the time when air travel had been shut down. After that his business continued to grow and thrive.

Dogs Being Trained for Air Travel (You Tube Image)

He hired his friend, Megan Blake, who is an actress, animal trainer, and lifestyle coach, and has a degree in psychology, to put together a program to train the dogs. Last year they started with a test class of 60 puppies from Guide Dogs for the Blind. As with any dog training there is also the element of training the person handling the dog.

The dogs became the most nervous during takeoff, landing, and turbulence -- conditions with which they would have the least experience. Petting was enough to calm them down at these times.

These days more dogs are flying the world than ever before, so it makes sense that obedience training needs to take things up a notch or two.  The first paid class was held this month. Additional classes will be held every month or two. They are open to any well-behaved dogs.

Baby Needs His Kisses -- The Animal Video Of The Day!!!
Comments