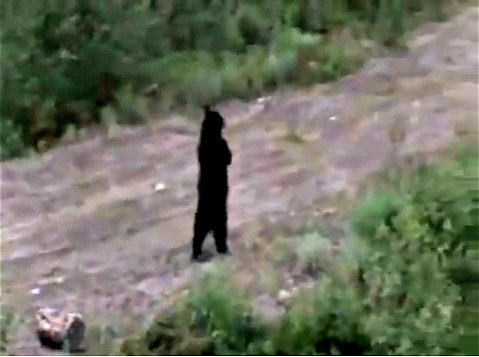 A few years ago in New Jersey a black bear was spotted walking upright by residents. Armed with cell phones or video cams, many captured footage of the animal traipsing around on its two hind legs as if it were all perfectly normal. Bears do sometimes stand up and walk forward on their back legs, but not as their sole means of ambulation. With this bear there’s been some suggestion among experts that he somehow injured himself in a way that stops him from walking comfortably on all fours. If that’s true, it makes the video footage far less amusing but no less fascinating. It’s pretty amazing, actually.

Pedals or Pedi, as the bear has become affectionately known, started showing up in suburban Oak Ridge, New Jersey, back in July of 2014. Officials said back then he was a juvenile under the age of three years who had likely injured both of his front paws or legs somehow. There had been some speculation two years ago that Pedals might have a hard time surviving the winters, but he’s popped back up in Oak Ridge again this year after a long absence, allaying fears that he might not have made it. He made his appearance again just this week.

American black bears, aka Ursus americanus, are a medium-sized bear native to North America. Widely distributed across the map, they are this continent's smallest and most common bear. Like all bears — except for pandas, which are herbivores — they are primarily omnivores. Their typical home is large forested areas where they hunt, eat and sleep. Due to shrinking habitat, however, the bears are frequently seen leaving the forests in search of food. Like a lot of creatures, easy access to people scarps has made them far less fearful of human beings, so it’s not surprising to see them in your neighborhood.

Still strolling along on two feet, Pedals appears to have grown since rangers began monitoring him back in June of 2014. Despite his injuries, the outlook for the bear remains positive due to what’s being called his “indomitable spirit.” There are still no plans to try and relocate the bear, as had been suggested last year. Supporters of the idea pushed for Pedi to be moved to a sanctuary in New York state, but Jersey officials have apparently nixed the idea saying they will not allow the bear to be captured and transferred to the facility. According to Lawrence Hajna, spokesman for the state Department of Environmental Protection, the bear is better off in its natural habitat and the agency won’t step in unless its condition deteriorates.

Pedals has shown up in the news a lot over the last few years. Between that and social media, millions of people around the world have now seen him waltzing along like a guy in a bear suit. If you look on the Internet, it seems it may not be all that unusual for bears to walk on their hind legs after all. In Canada a few months ago a group of tourists on a bus were entertained by a number of bears walking around on their back legs in exchange for snacks. There are several other examples on YouTube as well, like a bear captured on film in Laos or the rare Formosan bear in Taiwan. Looks like we may have to rethink that walking on all fours thing.

Bears
Creatures
Fun
News Stories
Wildlife
When A Bear Gets In Your Car . . .
Take Animals With You When You Shop
PetsLady's Pick: Funny Bear Tree Of The Day
Woodland Animals Love To Nest
Comments