Have you ever neutered your male dog only to think, I wonder how that blatant physical change is 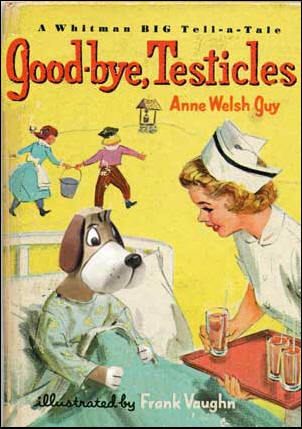 affecting him psychologically? No? Me neither, at least not for more than a second. But it seems, that there is someone out there who has put some serious thought into the psychological and physical affects that neutering can have upon a male dog, and they've come up with a very specific kind of prosthetic.

Yes, Neuticles creates testicular implants for dogs, for those people out there who know how important it is to spay and neuter your pets for control over the animal population (as Bob Barker always reminded viewers on "The Price is Right"), but just can't bare having their dog look like his manhood has been stripped away. It might seem a little crazy, especially when you take a look at the price tags of the implants; but hey, with so many people that treat their dogs as people, it was only a matter of time before someone came along to give dogs the same luxuries of men who find themselves lacking in that area.

Tell me, what do you think about Neuticles and their quest to make all neutered dogs appear as though they're still in tact?

So I Ate A Donkey Burger
Obamacare For Pets? Why Not? Veterinarians Are Being Pork-Barrelled!
Spending On Halloween Costumes For Pets Up 20 Percent
Animals So Sweet, You Could Eat 'em! - Animal Art of Olivia, and Hip Hop Candy
Comments