The sight of cows in a green pasture with a bell tied around their necks
is an iconic image of rural Europe, accompanied by that special sound
that can only come from a cowbell. It is such a pastoral, romanticized
view that it has become almost as synonymous with life in the Alps as have
alpenhorns and lederhosen -- until now. 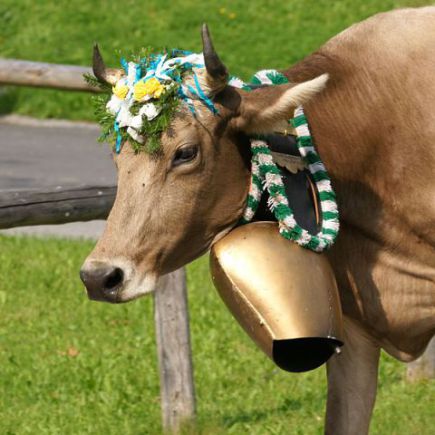 Two neighboring families of a farmer in the southeastern state of Styria filed a complaint with local authorities because of the noise being created by his cows. The bells that the cows were wearing were hitting against the metal trough that the animals drank from, even throughout the night. The resulting noise was disturbing the neighbors. The court ruled against the farmer and fined him 100 euros ($120) and ordered him to remove the bells from the cows.

Traditionally the bells were used to allow farmers to find any free ranging cattle that may have wandered off. Cowbells are made of hammered sheet metal rather than the casting of traditional bells. This allows them to be lighter weight for the animals to carry, and gives it the unique clanking sound as opposed to ringing.

The farmer has refused to remove the bells, change or remove the trough, or pay the fine, claiming that the bells were traditional and that they calmed the cows. His appeal of the verdict was denied and the court said that there was no need for the bells near a residential area, particularly when the animals are penned in an enclosed field.

The Shelter Pet Project Is The First Place To Look For An Adoptable Pet - No Matter Where You Are In The U.S.
Comments