Home on leave from the Navy, engineering student at the University of
Florida, Andrew Gray, noticed his parrot, Pepper, was lonely.  Pepper wasn't
happy being kept in one room when the rest of the family were in other rooms
of their home. And Pepper made it known, in the way only parrot-owners
would believe, that he was not happy.

Gray tried several ways to calm
his bird down, until finally Gray decided to build Pepper his own Bird Buggy. 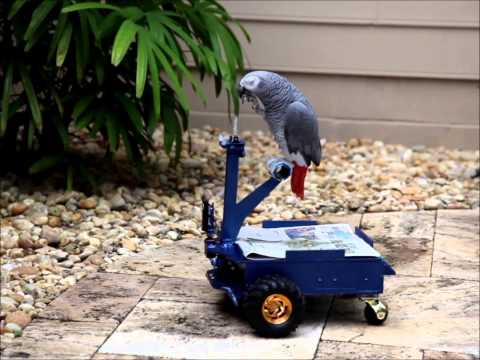 Pepper is now owner and operator of the Bird Buggy, which is is favored method of transportation through his owners' home. All with his beak, Pepper drives the Buggy forward and back and makes turns to the left and right by pushing the Buggy's joystick.

But the Buggy also has a robotic mode for it to seek out its charging system when Pepper goes to bed or when the Buggy battery gets low.  Additionally, there are sensors in the front of the vehicle to keep Pepper from bumping into things.

This You Tube video, posted by Gray, gives much more detail about the Bird Buggy and introduces you to the main parrot, Pepper, driving around his new toy.  The video is almost 5 minutes long, but if you just want to watch the parrot, he's the star of the first couple of minutes....

Gray told ABC News that the Bird Buggy design was successful in quieting his bird, but also it might "get me a job down the road."

Humming Bird Heaven! The Animal Video Of The Day!!!
Comments