Werewolf? There, There Wolf! Mythical Mondays

Humans have been creating and believing in mythological creatures for
centuries. Legends of the werewolf are centuries older than Team Jacob,
Sirius Black,
or even funny references in Young Frankenstein. They span the world --
but where did they start? 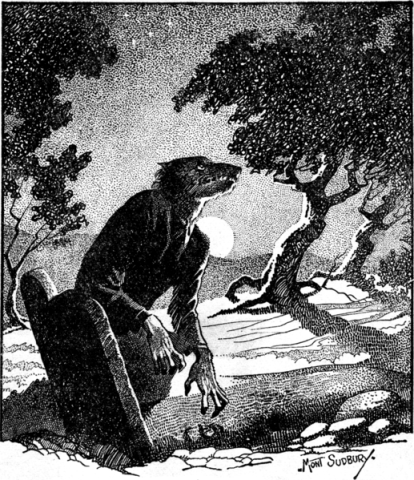 Most of the cultures the world over have myths of shape-shifting humans who can take on the guise of a wolf. Transformations usually begin after a catalyst event, such as a bite or scratch from someone who is already a werewolf. Many stories also involve the cycle of the full moon which is not surprising since in many ancient cultures life often revolved around the phases of the moon.

What most people think of when they think of werewolves has largely been derived from modern day fiction and Hollywood movies. However, the folklore is a bit different. The mainstream European werewolf was a monster that reputedly retained some of his wolf appearance which included the brooding "unibrow," curved fingernails, and a swinging stride. In Russia it was believed that you could tell a werewolf in human form by bristles under the tongue. In medieval Europe the creatures were reviled for digging up and eating recently buried corpses. In Haiti they were believed to trick mothers into giving up their children.

Ancient Greeks and Romans believed that one could be cured of being a werewolf by becoming exhausted. In medieval Europe this was thought to be achieved thought the herbal application of wolfs bane, or through exorcism (though werewolves had no revulsion of religious artifacts). While some methods were enough to kill the human, others were as simple as repeating the individual's given name to them three times.

In other cultures the werewolf was actually considered as a protective guardian. The Irish version, known as a faoladh, was considered to be watchful over children, injured men, and lost individuals.

Some authors and experts believe that some of the monster versions of these myths were a way for ancient peoples to explain the existence of serial killers. Others believe that they stem from the very real threat of attacks by real wolves, though in reality these were somewhat sporadic.

Road Kill To Be Newest Trend In The UK Bar Scene?

When A Flight Of Royal Falcons Goes First Class

Frolicking Ocean Tigers! The Animal Video Of The Day!!!