Humans have been creating and believing in mythological creatures for
centuries. If you didn't grow up Scandinavian, or at least around
Scandinavians, you may never have heard of the Julebok, or Yule Goat.
The 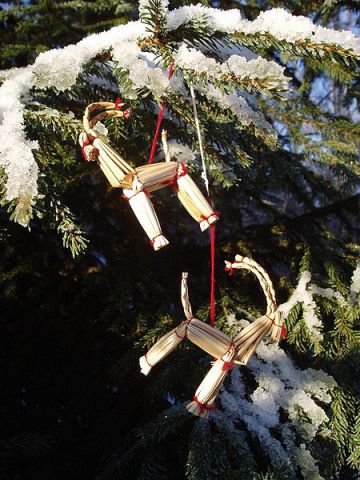 Julebok Ornaments (Photo by Udo Schröter/Creative Commons via Wikimedia)legend may stem from the two goats that were said to pull Thor
through the sky.

In old Scandinavian traditions dating back to around the 11th Century, a man-sized goat figure was led around by a man dressed as Saint Nicholas. This was to demonstrate his control over the devil.

The function of the Julebok has varied over the ages. From the 17th Century through the early part of the 20th Century in some areas the goat was a part of wassailing traditions in which young men wearing costumes would wander between the houses, singing songs, acting out stories, and playing pranks. The group would often include a Julebok as a rowdy and scary creature that would demand presents.

In Sweden people thought that the goat was an invisible spirit that would check in on them at some time before Christmas to make sure that the preparations for the holiday were proceeding properly. Figures made of straw or roughly carved wood representing the Julebok would be surreptitiously placed in front of a 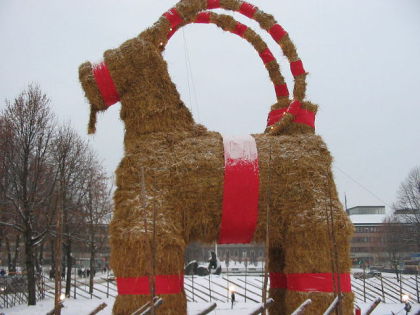 Community Julebok (Public Domain Photo)neighboring house. The challenge then fell to that family to pass the prank on and sneak the creature onto another neighbor's property.

In the 19th Century the role of the goat began to shift towards being the giver of gifts, a role that eventually became the realm of Santa Claus.

The Julebok is now best known as a traditional Christmas ornament familiar to many a Scandinavian Christmas tree. It is a figure made of straw and tied with red string. Large versions of the goat are often erected in towns and cities throughout Scandinavia. These figures are also often set on fire illegally before Christmas, no doubt to create a jolly bonfire.