Humans have been creating and believing in mythological creatures for
centuries. For Hispanic people all over the Americas the biggest and
scariest has long been el chupacabra, or chupacabras, the goat sucker. 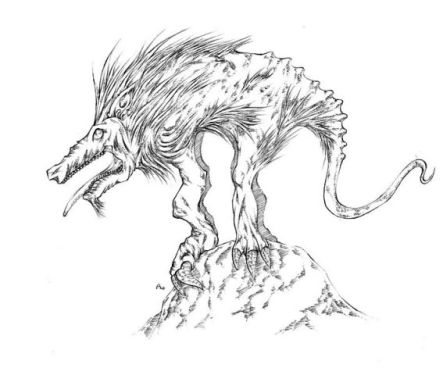 The creature's name is derived from the alleged habit of attacking livestock, goats in particular, and drinking their blood. This mysterious cryptid has made its way into American popular culture by appearing on television shows from Scooby Doo to the X-Files.

Chupacabras have two general physical descriptions. One is of a reptilian creature that appears leathery or scaly, a greenish-gray, with sharp spines along its back. It is three to four feet tall and its movement is similar to that of a kangaroo. It is reported to have a canine snout, a forked tongue, and fangs. It supposedly leaves the stench of sulfur in its wake and will screech or hiss when startled. Its eyes are said to glow strangely red, making witnesses nauseous.

The other description is of a kind of wild dog, mostly hairless, and a spinal ridge. It is said to have large eye sockets, claws, and fangs.

Chupacabras drain all of the blood from the animals that it preys upon through three holes in the shape of an inverted triangle.

There has been no true scientific evidence of chupacabras. Some researchers believe that the reports of sightings have probably been other animals, such as dogs or coyotes, suffering from scabies or mange.

Fun
Fun Stories
History
Weird, Odd or Bizarre
Never Say "No" to Panda -- The Animal Video of the Day!!!
PetsLady's Pick: Cute Ripping And Wrapping Dog Of The Day
Corgi Races? Surely You Jest! Nope, It’s A Real Event In Minnesota This July
Get A Pig USB Hub For When Your Files Hog Your Hard Drive Space
Comments