Grendel is the first of three antagonists that the title hero of the epic poem Beowulf faces. The creature is described in different ways in the poem which has led to centuries of arguing between scholars over exactly what Grendel was, not just what he represented. 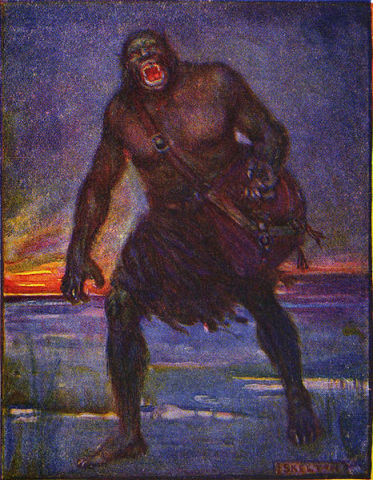 On one hand he is described as a big, hairy creature, bipedal, and over ten feet tall. He sounds much like a variation on the descriptions of the modern day Big Foot or Sasquatch but with a really nasty temper.

On the other hand he is described as being covered with some kind of natural armor:

"Every nail, claw-scale and spur, every spike
and welt on the hand of that heathen brute
was like barbed steel."

To some scholars this has indicated that Grendel was some sort of upright, bipedal dragon. The argument remains just that since the poem gives no direct description of the monster. It is also mired in the fact that the poem stems from the early days of the English language -- a translation of which is also open to scholarly debate.

Without a time machine and an excellent translator, we will never truly know what Beowulf's author thought Grendel was or intended him to be -- other than the terrifying monster that Beowulf destroys.

Educational
Fun Stories
Weird, Odd or Bizarre
World's First Dog To Be Certified To Sniff Out Agricultural Pests Gets To Work
Halloween: Time To Get Your Boos At The Zoos
Wet Animals Shake in Slow Motion -- The Incredibly Cool Animal Video of the Day!!!
Vampire Crabs Successfully Bred At British Zoo
Comments