Mt. Everest: Stray Dog Ends Up On Top Of The World

Rupee started rough in life. His owner, Joanne Lefson, found him
scrounging for existence in a dump in Ladakh, Northern India. At just
eight months old he would collapse after walking just a few meters. He
was just 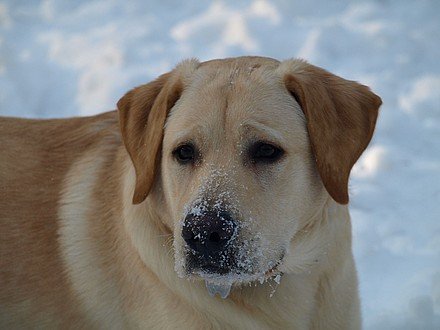 Yellow Labrador Retriever in the Snow (Public Domain Image) hours from dying. She could see that he had heart, took him
home and fed him a diet of boiled eggs, rice, and love. This year, fully
healed and strong, Rupee made it to the top -- the top of the world,
that is.

The trip was originally supposed to have happened with Oscar, Lefson's previous dog. Unfortunately, tragedy struck in January when Oscar was hit by a car and died. He and Lefson had traveled the world together to bring attention to the plight of stray dogs and promote adoption.

Now it was time for Rupee to step up and take the world stage by joining Lefson on her trek up Mt. Everest.  Even though Rupee is a healthy dog now, Lefson was concerned about him getting tired and hired an extra Sherpa to carry him if the need arose. Rupee's vet approved the trek and said that he would suffer no ill effects from the altitude.

It took ten days of trekking just to reach base camp at 17,000 feet above sea level. In addition to Lefson, Rupee, and the Sherpas, the team included Dev Argarwel, a film maker from Mumbai, to document the amazing journey.

To see the actual photos from the trek, click here.

As Lefson has pointed out -- Rupee is a wonderful example of what can happen when you give a stray dog a second chance.