Mr. Stubs is an alligator who can't swim. That is because he is missing
his tail. Alligators are cannibalistic and when Mr. Stubs was younger a
larger alligator tried, and almost succeeded, in making a meal of him.
As it was, 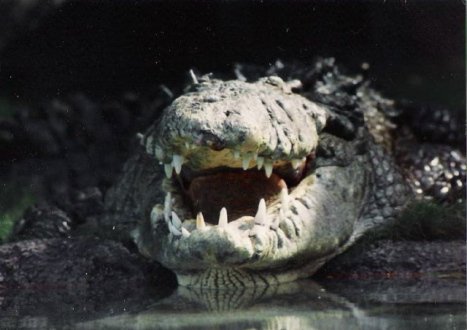 Alligator (Photo by James/Creative Commons via Wikimedia)Mr. Stubs just gave up a snack. Without a tail he can't move
forward in the water, so he just splashes around in circles.

As a resident of the Phoenix Herpetological Society, Mr. Stubs has had a lot of help surviving what would otherwise have been a life-threatening injury. Alligators store sustenance for the winter in their tails and the staff at the Society help make sure that Mr. Stubs doesn't starve to death.

After years of just dealing with Mr. Stubs problems as they came, things changed when they heard about the dolphin that got a prosthetic tail. It didn't take much of a leap to realize that the same technology would be a major help to the hapless alligator.

Now doctors are measuring Mr. Stubs and figuring out how to fit him with the first reptile prosthetic. X-rays have shown that there is enough of the backbone structure left to use for the operation. Since the nine-year-old gator is likely to live for another 60 years, he will also likely need replacement prosthetics as he continues to grow larger.

The whole operation is being paid for by donations. To help Mr. Stubs get a second chance, click here.

Your Kids Can Make Friends With Their Winter Scarf
Alligator Goes To College, Doesn’t Get Past Parking Lot!

Woman Feeding Alligator -- The "Don't Do This" Animal Video of the Day!!!
Working 11-7, What A Way To Make A Living
Comments