Trackers in Rwanda's Volcanoes National Park comb the forests every day to find and destroy the snare traps set by poachers. One day earlier this month a tracker, John Ndayambaje, was working in an area near the Kuryama gorilla clan when he spotted one of these traps. As he moved in to dismantle the trap he was warned away by a silverback gorilla named Vubu. Two juvenile gorillas rushed out and destroyed the trap themselves. 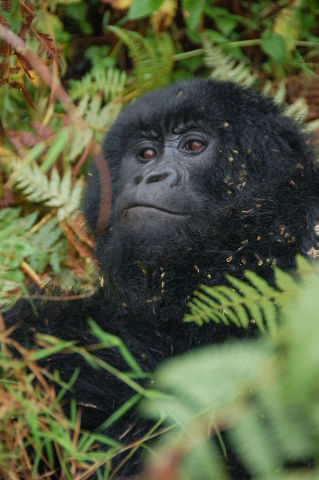 The pair was Rwema and Dukore, a male and female about four years old, then spotted another trap that Ndayambaje had missed. They were joined by a third gorilla, a teenager named Tetero, as they destroyed the additional trap. Ndayambaje and a few tourists watched the operation in astonishment.

According to researchers at the Dian Fossey Gorilla Fund's Karisoke Research Center this is the first time that such behavior has been observed among the primates. The speed with which the animals worked indicates to the researchers that this was not the first time that they had done this. The gorillas were focused and determined. They accomplished their mission and left as quickly as they had come. It was something of a gorilla SWAT team.

The researchers try to interfere as little as possible with the gorillas so that they will maintain their own way of life. In this case it seems that they probably learned this idea from watching the trackers who dismantle the snare traps.

The mountain gorilla is a species threatened with extinction with fewer than 800 left in the wild. Their ability to fight back may be what ultimately makes the difference in the battle for survival.