In the interior of British Columbia, Canada, moose populations have
dropped by as much as 70 percent as aggressive salvage logging of
beetle-kill trees without restriction or concerns over the eenvironmental
impact has gone on for years. Miles of clear-cut forest land has
drastically reduced the moose's natural habitat and made it easier for
predators, both wild and human, to prey upon them. 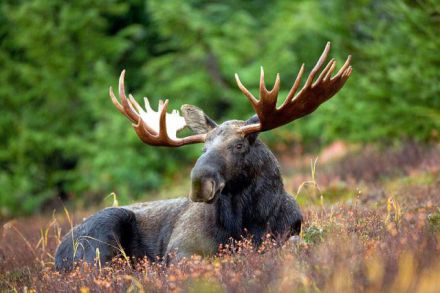 With the situation becoming dire, the Canadian province is imposing stricter limits on hunting opportunities. One native group is also declaring their traditional Chilcotin territory out-of-bounds to non-native hunters. The Ministry of Forests, Lands and Natural Resource Operations has pledged to investigate all possible reasons for the decline including predator populations, unregulated hunting (moose are popular big-game animals for hunters), changing environmental conditions, the effect of the mountain pine beetle infestation, as well as the resulting timber salvaging operations and increased access to support the operations. They will also be looking into the cumulative effects of any combination of these factors.

The mountain pine beetle has also been implicated in the recent High Park and Waldo Canyon wildfires in Colorado. British Columbia is no different and has experienced major wildfires due to the beetle-kill trees. This has also added to the loss of habitat for the moose.

Hunters, guide-outfitters, and native hunters are being encouraged to come
together to work towards recovery of moose populations as quickly as
possible. Culling of predators is one option being considered.

Earlier on, Jim Snetsinger, the province's chief forester, waved off any concerns that the logging operations were posing any impact on the wildlife at all, because he had seen animals during his stay in the Chilcotin. He claimed that they had "a resilient ecosystem." Snetsinger is now retired.

Moose are infamous for being short-sighted. Perhaps not nearly as short-sighted as officials in British Columbia have been when it comes to environmental concerns.

It's Not Just The Birds And The Bees: Insects Are Even More Endangered!
Let A Ladybug Join You For Tea
Comments