Moose: Working At The Car Wash!

It is winter again and so it is time for the reports of moose licking
cars are starting to roll in. Visitors at Sprague Lake in Colorado's
Rocky Mountain National Park this past Thursday were treated to the
entertaining sight of a moose cow licking down a number of cars in the
parking lot. It is a sight that happens all across North America
wherever moose are found. 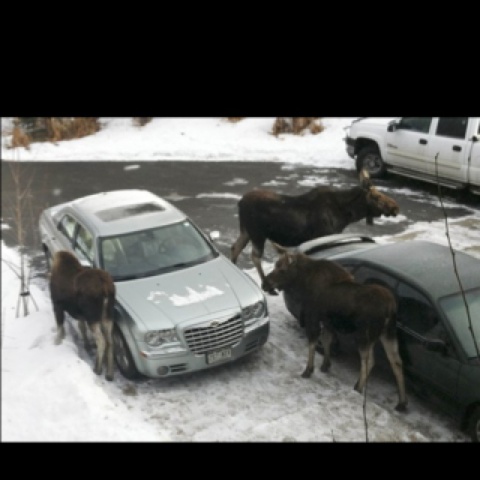 The cars aren't the only thing that takes a licking during the winter. Moose are also seen licking the paved roads and roadside salt pools, posing a traffic hazard. A car running into a moose will total both parties. Trucks fare slightly better in such a meeting. Moose will kneel or lie down to lick the salt from the pavement, which may make them harder to see.

During the warmer months moose generally get enough salt from their usual plant sources -- something that becomes harder to find in winter.

Moose are the largest member of the deer family and like deer they enjoy licking salt. The use of road salt during the winter months attracts moose to engage in behavior that humans find amusing, odd, and utterly entertaining. For motorists it may be a toss-up as to whether they would rather have road salt or moose spit covering their vehicles, but at least they get a dandy story to tell with the moose drool.

There is no word on whether or not the salt is safe for the moose to lick. There is also no word on what moose juice will do to a car's paint job. On the whole I think I would prefer the moose to the road crud. But that's just me.

Even Some Cats Go Back To School