MJ (short for Mary Jane) started life just about as unusually as she is
living her life. She was born in a drawer in Rudi Saldia's apartment in
Philadelphia, PA. Her mother and siblings were all given to good homes
after that, but MJ stayed on to become Saldia's first cat. Before her he
had only had "sugar gliders," little possum-like 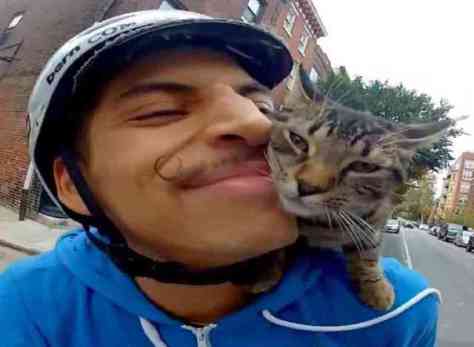 MJ and her Owner, Rudi Saldia (You Tube Image) marsupials. He had
taught them to ride on his shoulder as he went about his duties as a
bicycle courier. It seemed only natural to teach MJ to do the same.

Not only did she start out life in a drawer, but she was also born on April Fool's Day. Once Saldia, 25, realized that she just naturally liked to sit on his shoulder he began to train her to ride with him. As a bicycle courier for IDS he spends a lot of time on his bike.

On the first day they managed to go one block together, the next day it was two blocks. Now she will stay on his shoulders for 25 miles. He hopes to get her trained to stick with him for 100 miles before the end of the year. 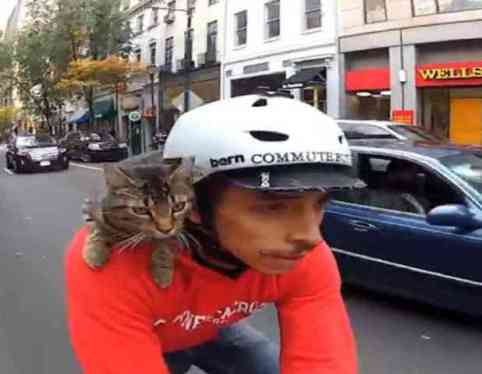 MJ and her Owner, Rudi Saldia (You Tube Image)MJ truly seems to enjoy the ride. Saldia says that she enjoys the feel of the wind in her fur. In true cat fashion she moves from shoulder to shoulder to get a view from all sides. The one thing she doesn't seem to like are sirens. When she hears one she will duck behind Saldia's head for safety.

When the two are out making deliveries together they garner a lot of attention. Some people don't know what to make of the pair. Others are just in awe. People always want to pet MJ and are blown away that she showed up via bicycle. In spite of all of this attention, MJ is choosy about who gets to hold her -- only Saldia and his girlfriend get to have that honor.

MJ also apparently has great balance. According to Saldia she has never resorted to using her claws to hang on. He claims that there is not a scratch on him -- at least not from the rides anyway.

PetsLady's Pick: Cute Rainbow Cat Of The Day
The Force Is Strong With This Kitten -- The Animal Video Of The Day!!!
Comments