Back on March 8, 2013 May, a strawberry blonde sled dog, got separated from
her team during the 1,000 mile Iditarod race after they got tangled with another team. The dog had been on
loan to musher Newton Marshall 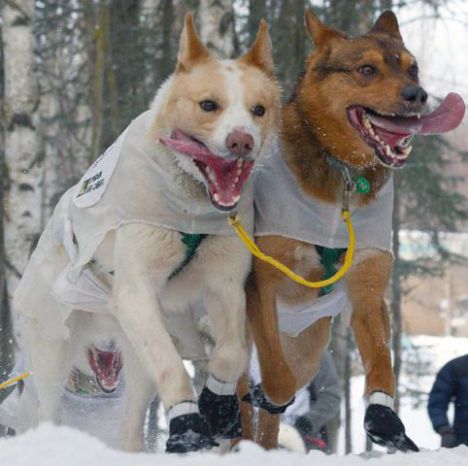 Sled Dogs in Action (Photo by Frank Kovalchek/Creative Commons via Wikimedia)of Jamaica by her owner, musher Jim
Lanier of Chugiak, Alaska. Marshall was scratched from the race at the
next checkpoint for coming in without a full team. A search was begun to
find the missing dog.

Despite reported sightings of the canine and fears that she may have perished between the threats of snowy cold and hungry wolves, she was finally found on March 13.

May had apparently travelled at least 300 miles from the spot she had gone missing, heading for home. She had followed the Iditarod race trail backwards, over some of the most rugged land in Alaska, feeding off the leftovers of the other teams. Eventually she missed a turn and ended up really lost, but by then she was close enough to civilization to be found by people out "snowmachining." 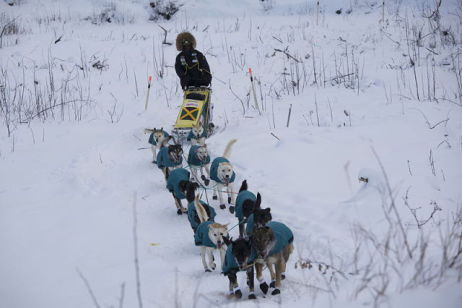 Newton Marshall Mushing in 2009 Yukon Quest (Photo by Carole Melville/Creative Commons via Wikimedia)Kaitlin Koch, Matt Clark, and Michael Hansmeyer approached the skinny dog in a sled harness with bloody paws cautiously, When Koch got down on the ground May went right to her. They took the dog back to Hansmeyer's cabin and discussed where the dog could have come from. Koch was certain that she was the dog missing from the Iditarod. They wrapped her in a blanket, fed her a little food, and called Iditarod officials.

Koch stayed with May as she slept; keeping one hand over the dog's heart to make sure it kept beating. Stan Smith, an Iditarod veteran, showed up an hour later to take charge of the wayward animal. May is now in his care until her owner makes it home. She is being pampered with canned salmon and kibble stew as well as a lot of love.

May's incredible journey is a testament to the strength and endurance of these incredible canine athletes.

A Very Miniature Chihuahua For Your Garden