A Miracle For The Love Of A Cat

Seven-year-old Lorcan Dillon of Manchester, England, suffers from
selective mutism, a psychiatric disorder that makes him unable to speak
in certain situations, including school, and expressing his feelings
toward his family. Then a fluffy little Birman cat named Jessi-cat moved
into his home and his heart and changed his life. 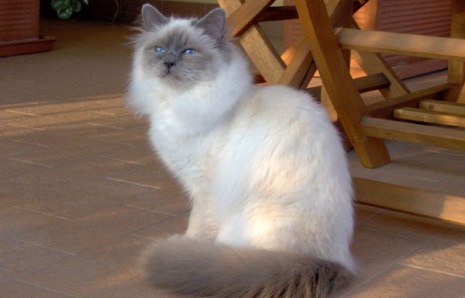 A Birman Cat (Photo by Claudia Zaino/Creative Commons via Wikimedia)

Lorcan has always been able to speak normally at home, which is common for people with selective mutism. Situations outside of the home and people who are not family have been another matter altogether. The condition leaves its victims feeling lonely, isolated, and lacking in confidence. The condition is estimated to affect 1 in 1,000 children. Lorcan was diagnosed in nursery school at the age of three and a half.

Lorcan's mother, Jayne Dillon, brought the cat home two years ago. She says that pets, particularly cats, are very good for children with special needs, like autism. It has given Lorcan an avenue for communication.

The pair is inseparable now. Jessi-cat is always interested in what Lorcan is doing and gives him a steady supply of unconditional love. Lorcan can be himself with the cat and has found it possible to express his love for her physically -- something he does not do with people -- with cuddling and petting. He has also been able to tell her "I love you." This is something that touches his mother deeply.

Over the last year Lorcan has started making remarkable improvement. He has started communicating with people he doesn't really know. He is even reading aloud to one of his teachers now.

The pair are so close that they are up for an award in the Best Friends category of England's Cats Protection National Cat Awards. If they win then Jessi-cat will have a shot at the National Cat of the Year Award.