Just over a week ago a section of Interstate 40 that runs through
Oklahoma was in chaos when a miniature mare and her colt turned up for
the morning commute. The sight of the diminutive pair went beyond just 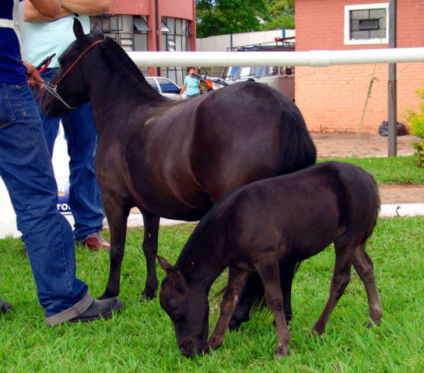 Miniature Horses (Photo by José Reynaldo da Fonseca/Creative Commons via Wikimedia)causing a bit of curiosity slowing. They triggered an accident and two
people had to be removed from the scene on stretchers.

Oklahoma Highway Patrol, Animal Welfare, the horses' owners, and several others joined together in a makeshift round-up to corral the horses and get them home again. The impromptu rodeo no doubt added to the traffic back-up as it went on for hours.

The mare, Aurora, and her colt, Prince Phillip, were finally caught, but as they were being loaded into a trailer to be transported back to their stable, Aurora broke free and the wranglers went back to work. The mare was finally tranquilized and returned to her field.

Meanwhile, back at the interstate, a white truck that had stopped in the middle of the highway was rear-ended, sending it flying into the trees. Two people were injured in the accident.

It is suspected that highway workers damaged the fence to the horses' pasture, which allowed them to escape. The owners have also been cited with violations.

8 Ways To Love Your Senior Horse
Heaven On The Hoof