Who doesn’t remember Lassie, Toto and Rin Tin Tin? Now, right up there with those celebrated dog actors of the past 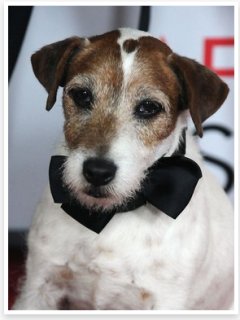 is Uggie, the Jack Russell terrier who starred in the Oscar-winning film, The Artist. After battling prostate cancer for some time, he was quietly put to sleep on August 7th at the age of 13.

But while Uggie’s canine predecessors starred in a good number of Hollywood movies, none were distinguished as much acclaim as Uggie. Receiving top honors from the entertainment world, his 2011 performance won both the Golden Collar Award and the prestigious Cannes Film Festival's Palm Dog Award.

He was however not recognized by the Academy Awards, since there are still no award categories for animal actors. In fact, in a valiant effort to change the Oscars rulings, Movieline critic S.T.VanAirsdale mounted a fan-driven “Consider Uggie” Facebook campaign to get Uggie the Best Supporting Actor nod — which unfortunately was unsuccessful.

Uggie also showed the world his acting chops in the movies, Water for Elephants and The Campaign. In June 2012, Uggie retired from acting after imprinting his paws in the iconic 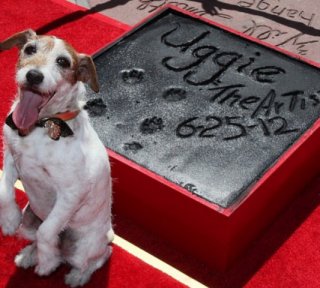 cement sidewalk outside Grauman's Chinese Theater in Los Angeles, according to the Washington Post. That year, the pup also released a memoir titled “Uggie: My Story," which was co-written by best-selling author Wendy Holden.

His Los Angeles-based owner and trainer, Omar Von Mueller, announced Uggie's death in a post on his Facebook page.

"We regret to inform to all our friends, family and Uggie's fans that our beloved boy has passed away," Von Mueller wrote. "In short, Uggie ... is now in a better place not feeling pain. Thank you for your support, I will not be reading any comments for a while as it is too painful at the moment."

In The Artist, about the rise and fall of two Hollywood actors of the 1920s, Uggie played "Jack," the loyal pet of silent-film star George Valentin [played by Academy Award winner, Jean Dujardin], whose career took a nosedive with the advent of talking pictures. In one of the movie's more dramatic scenes, Jack helped rescue the depressed George from a fire and saved his life.

Dujardin paid tribute to his canine co-star in an Instagram post in his native French. Loosely translated, it said, 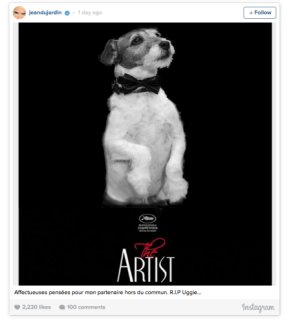 And from the rest of us might I just add: 'our loss is heaven's gain!'