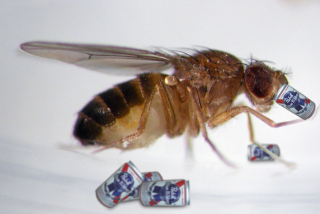 Male fruit flies turn to alcohol when spurned by females: image via erratica.com Man has more than one thing in common with fruit flies, researchers have shown.  The newest study, conducted by scientists from UC San Francisco and the Howard Hughes Medical Institute, show that fruit flies, like many humans, drink to drown their sorrows.

The researchers observed that when male fruit flies were consistently rejected sexually by female fruit flies, they chose to drink ethanol-spiked food over unspiked food.  Some drank so much of the spiked food that they passed out.  Sound familiar?

Fruit flies that were successful in mating did not tend to choose the spiked diet.  This coincided with higher brain levels of a chemical called neuropeptide F, while those that drank the alcohol-laced food had lower levels of the brain chemical. Humans have a similar chemical in their brains called neuropeptide Y, which has been shown to be a significant player in human levels of stress and anxiety, as well as learning and memory.

While the authors write that eventual sexual fulfillment of the male fruit fly will raise levels of neuropeptide F and reduce consumption of ethanol-spiked food, the study emphasizes the effect of social experiences on addictive behavior. In humans, the social experience (rejection) might be sexual or from any other real or perceived rejection (disrespect, lost job, etc.), the inference being that when human desires are fulfilled, the need for addiction is not present, or could be reversed.

The study, Sexual Deprivation Increases Ethanol Intake in Drosophila, is reported in the journal Science

Find The True Meaning Of Kwanzaa With A Li'l Rabbit