One day in 1888 a little mixed-breed terrier wandered into the post
office in Albany, New York. The postal workers there took pity on the
poor pup and let him spend the rainy night with a bit of shelter. He
curled up on a pile of empty mail bags and went to sleep. He seemed to
have an affinity for the feel of the canvas bags and the smell of the
mail. The little pooch began to follow the full bags onto wagons and
eventually onto trains. 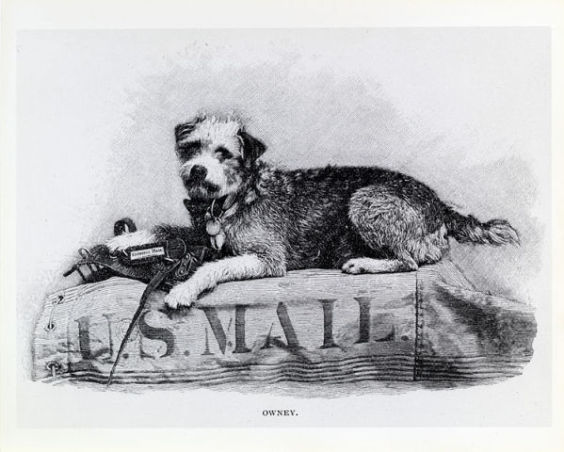 It is believed that Owney had once been the pet of a mail man who left him follow him on the job as he made his deliveries. Eventually something happened that left the dog a stray. It was probably the smell and feel of home that brought him to sneak into the post office through a back door that had been left ajar on a cold and rainy night.

Owney was adopted by one of the postal workers, a man by the name of Owen. Eventually the supervisor took notice of the ubiquitous presence of the dog and inquired about his presence. Between the persuasion of the workers and Owney's social skills, the supervisor allowed the dog to stay even though it was against the rules. 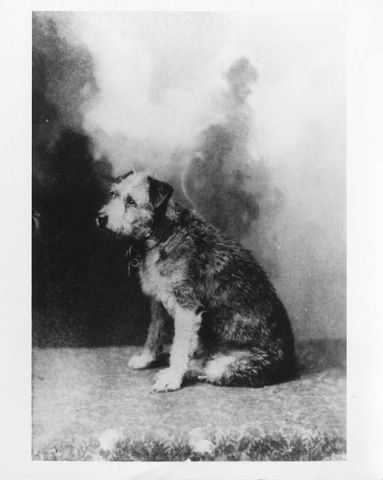 He developed a reputation with the railway postal clerks for being good luck since none of the trains he travelled on were never in a wreck while he was on board. He also acted as a guardian of the mail and would not allow anyone but official mail clerks to touch the bags or the mail. 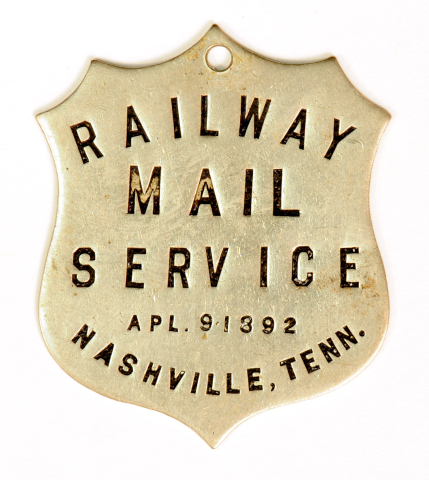 Since Owney would disappear for months at a time as he rode with the mail the Albany postal workers became increasingly concerned about making sure that he would make his way home each time. They bought him a collar with a metal tag identifying him and his home. As time went on workers in other parts of the country and Canada noticed and began adding their own tags to his collar. In 1893 he received a medal from the Los Angeles Kennel Club for being the Best Travelled Dog.

His collection of medals eventually grew so large that the United States Postmaster General gave him a special coat to wear to display them all. Eventually Owney had so many medals that his small body couldn't carry them all. As medals were removed and sent to Albany or Washington D. C. for "safe keeping" they lost count of how many medals he finally received. 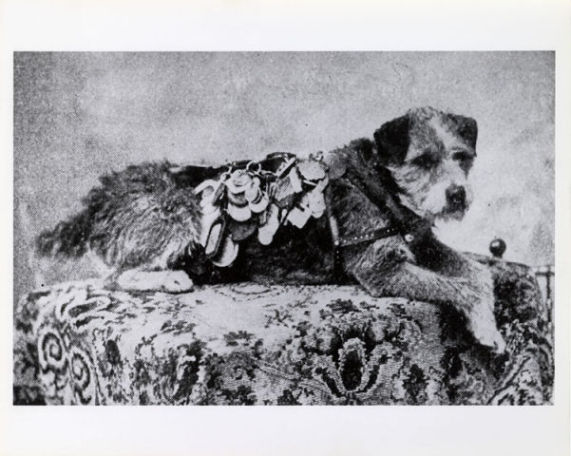 Owney and his Coat of Many Tags (Public Domain Image)

As Owney aged it seemed that his travelling days were over and a mail clerk in St. Louis agreed to take the dog into his home. At the same time a manager of the Railway Post Office created a ruckus about having a "mongrel cur" travelling with the mail and ordered that the dog not be allowed to set foot in another postal car. Postal workers everywhere were incensed. In an act of defiance, Owney was brought on board a railway train for the last time in the summer of 1897.

During the trip something went wrong. The details are unclear but it was reported that Owney went mad and attacked a postal worker and a U.S. Marshall and was subsequently shot on the orders of a local postmaster in Toledo, Ohio. The Chicago Tribune called it "an execution." 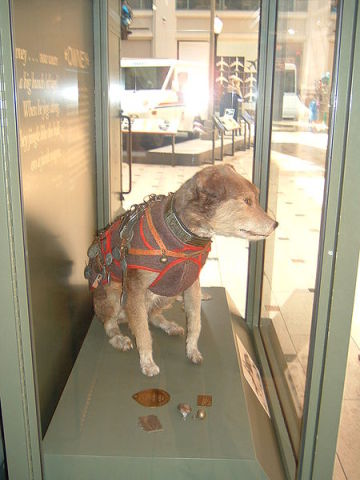 Instead of being buried, Owney was stuffed (as was the fashion of the time to honor beloved pets) and is now on display at the National Postal Museum. Of his estimated 1,017 medals, a total of 372 are also on display there.

In 2011, more than 100 years after his passing, the U.S. Post Office issued an Owney commemorative stamp in his honor.

Dogs
History
News Stories
It's That Time Of Year Again! The Animal Costumes Video Of The Day!!!
Comfort Dogs For Winter Olympics

Transform Dog Food from Drab to Fab with a Sprinkle of Puppy Dust!

Your Dog Needs A Leotard! Wait! What?
Comments