Get ready to fall in love. Jesse the Jack Russell terrier is one amazing little dog. He can help
with all the house work, from dusting to taking out the trash -- he even
does windows! At the end of a long day he will give his human mom,
Heather 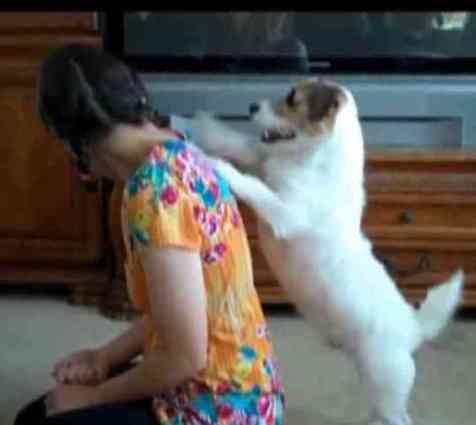 Jesse Gives Heather A Shoulder Massage (You Tube Image)Brook, a shoulder massage and help her take off her shoes and
socks. The highly efficient pooch will then take a few moments to put the
socks in the laundry.

Jesse and Heather have managed to turn his many skills into a successful business venture, billing him as "Just Jesse the Jack Russell Terrier." As a team they are force to be reckoned with in television and advertising.

This little terrier is far from being the first to make it big in the entertainment field. One of the first was Terry, the Cairn terrier, who played the part of Toto in the epic film "The Wizard of Oz." Then there was Moose, a Jack Russell terrier, and his son, Enzo, who 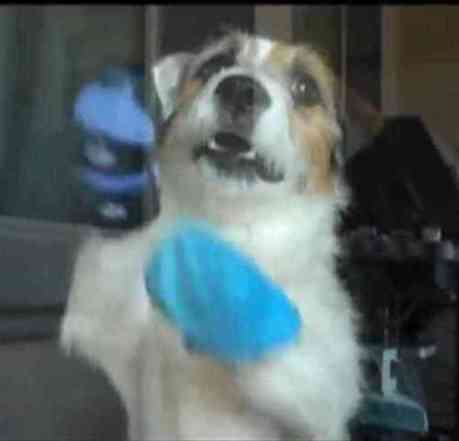 Jesse Does Windows (You Tube Image)played the part of Eddie on the television show "Frasier" for 11 years and virtually stole the show. More recently was Uggie, the Jack Russell, who won acclaim for his role in the movie "The Artist." (Both Cairn and Jack Russell fall into the category of "working terriers.")

While Jesse isn't taking the stage at the Emmys or Oscars yet, he has invaded the Internet with viral videos on You Tube. It is in cyberspace that he shows off his considerable housekeeping skills, shares his environmental activities, does aerobics, celebrates Christmas, outsmarts a burglar, and shows off total cuteness throughout.

With all of this talent in a small furry package, Jesse may just be the next breakout animal star. His resume is extensive, from print ads to motion pictures. He was in Beverly Hills Chihuahua 2 and has appeared on The Late Show with David Letterman. He has a website, a Facebook page, and even his own blog so that you can follow along on his amazing journey through life.

These terriers tend to be extremely intelligent, high energy dogs. Before you adopt one make sure that you and your family are prepared to put the time in to maintain the active lifestyle this type of dog needs, in terms of both physical activity and mental stimulation.

Get out the Dustbuster, it's time for Jesse to vacuum the floor!