Maxi, the striped tabby cat from two doors over, was the feline version of a steel fist in a velvet glove. Neither especially speedy nor noticeably vocal, Maxi was strong when he had to be and to every cat around he was the unquestioned master of his domain. 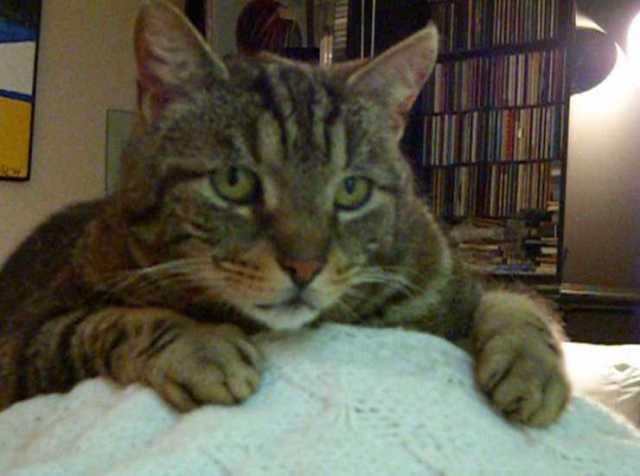 Maxi came to our community several years ago and being an outdoor cat, soon attracted my notice. We'd spy him walking up and down the trail that ran between the edge of our backyards and the deep ravine beyond, always at the same relaxed pace. His presence became so regular and predictable we began calling him the Security Patrol Cat.

Shy at first, Maxi didn't seek attention or affection, being content to leisurely “patrol” the area; when he rested, it was usually on a padded chair or on top of a large stump in his owners' backyard – always looking outward, on guard against threats or intruders be they human, feline, or something else entirely. One afternoon, I noticed him digging intently around the base of a hedge. He was so focused he didn't even sense I was there (or, more likely, he DID notice but paid me no mind). 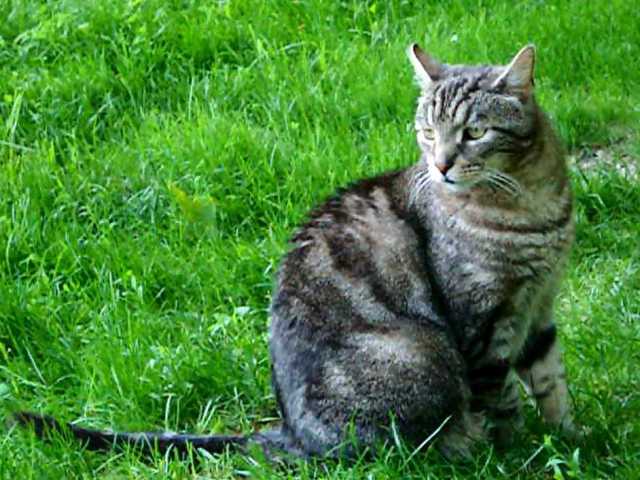 After about a minute of intense activity he suddenly jumped out of the hedge... with a snake in his jaws! Now calm and relaxed, Maxi sat proudly with the now-deceased, foot-long snake between his paws. There was, I thought, definitely more to this cat than meets the eyes.

Having previously succeeded in winning over our community's fearsomely independent White Cat and having been "adopted" by Jean Grey, our neighborhood Brazilian Shorthair, I set myself the goal of befriending Maxi. Slowly but surely I managed to gain his trust and after a while, he would approach me gingerly and submit to a quick head scratch or neck rub. Still, he acted more than a little standoffish... that is, until I'd assume our short meet & greet was over and try to walk away. With a flash of tawny fur, there he'd be, blocking my path until he got another neck rub – always in control, our encounters weren't over until Maxi decided they were over. 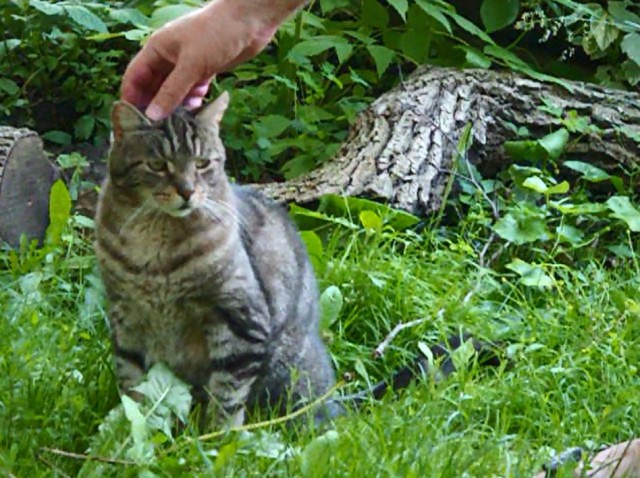 After a few months of this odd passive-aggressive relationship, things began to change. Maxi added our backyard to his security patrol route and on many a snowy winter morning we would spy a trail of cat paw-prints leading to, then away from our patio door. Sometimes the prints seemed to lead only TO the door... on closer inspection, Maxi had returned using the very same paw-prints he left on the way in!

Having determined we were “harmless” (though we never fed him - that's a big no-no) and with warmer weather allowing us to open our sliding screen door more often, Maxi decided to add the inside of our house to his territory. He'd come in, lay down on a small rug, and look at me... his silent request for a head & neck rub, which he then received to a chorus of purrs. Hmm, who was training who here? As time passed, the mere sound of our screen door opening was enough to alert him and in mere seconds he'd round the corner of our yard like a lion in one of those old safari movies (an appropriate analogy as Maxi seemed to think of himself as a tiny lion). 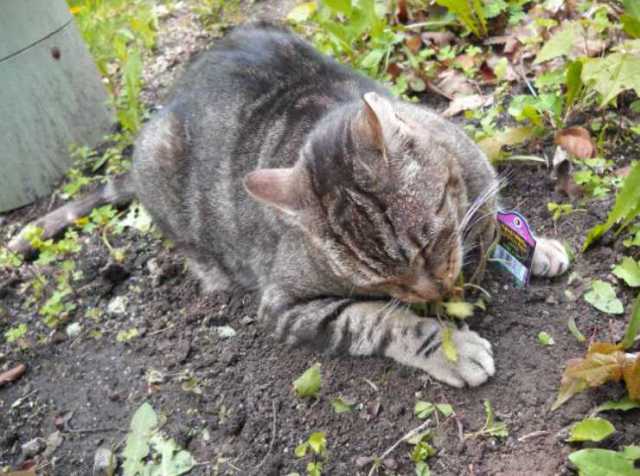 About the only thing to distract Maxi from his steadfast charge to our living room was the small catnip plant in our backyard “garden”. If anyone should doubt the attractiveness of catnip to cats, try planting a small bush and watch how long it lasts! Although the battered plant gamely tried growing new leaves after every rain, Maxi was just as determined to gnaw any visible (or smellable) catnip down to the roots – as can be seen in the above photo.

Catnip defeated, Maxi would turn his attention to our screen door and if we weren't home to let him in, too bad... for the door! Maxi was more insistent about coming over during the winter and by springtime the corner of the screen was in shreds. When we were home, though, Maxi was the perfect guest: after quietly checking out the various rooms, he'd jump up on our sofa and (after the requisite neck rub) would curl up in a ball and sleep... and he'd snore! 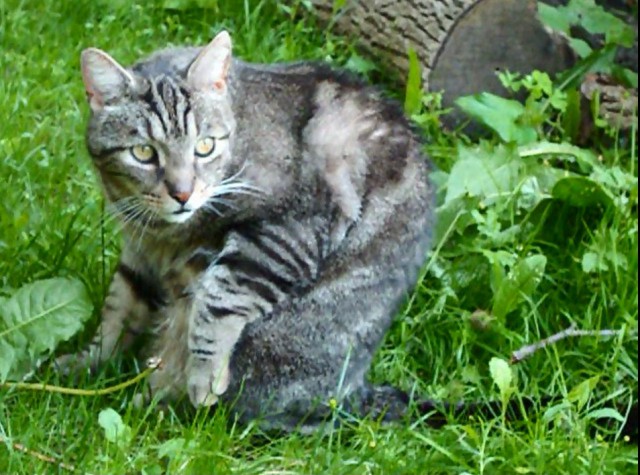 The sound of Maxi's snoring could be compared to someone gently poking a set of Scottish bagpipes. Luckily it was very quiet. After a few minutes or a few hours, he'd wake up, yawn, stretch, and go to the door to be let out... silent as always. Tail held high, Maxi would regally saunter down the yard and turn the corner on his way back home.

Whether soundly sleeping or just relaxing on our sofa or patio, Maxi had a way of lowering stress in anyone nearby. I'm certain he would have made a fantastic therapy cat, if he decided that's what he wanted to do. All good things must come to an end, however, and when Maxi's owner told me they would soon be moving to the country, I knew we had very little time left to enjoy him. His last day with us was like so many others: I'd open the screen door, he'd turn the corner and determinedly trot across our backyard, and after a vigorous massage from yours truly he'd be sound asleep on our sofa, snoring and smiling (yes, smiling... see below). 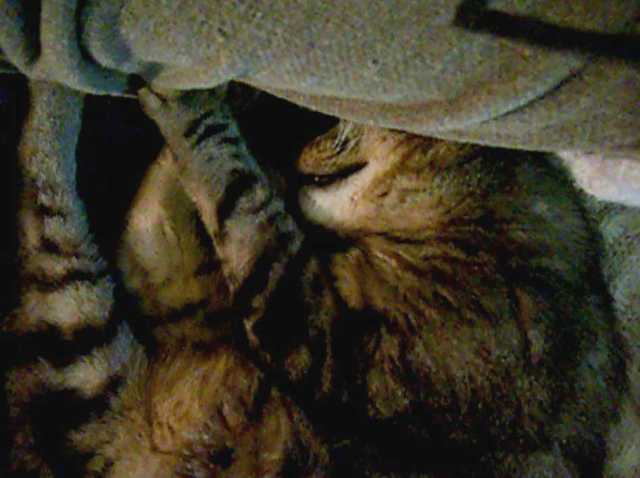 It was hard to say goodbye to Maxi, which may sound odd being that he wasn't our cat. Regardless, in the time I knew him he became a part of our lives and a day without a visit from Maxi was a day that seemed incomplete.

I hope he'll enjoy his new life in the country: so many new sights, smells and places to explore. Maxi's nine years old now but I'm sure the challenge of establishing and protecting a brand new territory will rejuvenate him. As for me, though I miss him I'll never forget the peace and serenity he brought to our lives.