In an amazing feat of courage, endurance, and compassion, back in 2011 a
man rescued a black bear from drowning at the risk of his own life. It
all started when the bear inadvertently wandered into a populated area
along Florida's Gulf coast. The Florida Fish and Wildlife Conservation
Commission responded to remove the bear with unexpected results. 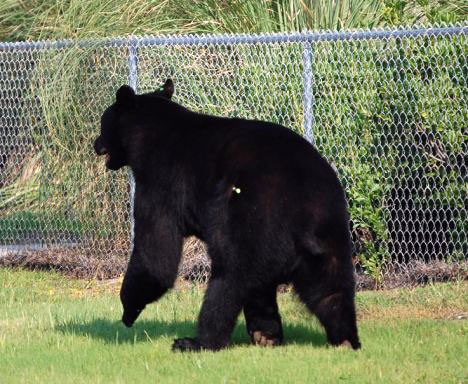 To capture the bear and move it back into a wilderness area, the team went with the standard of shooting the bear with a tranquilizer dart. That was when things took a startling turn. Instead of running for cover as they had expected, the bear ran for the water and began swimming. Before long he was also getting drowsy and in serious danger of drowning.

Without a thought of his own safety biologist Adam Warwick dashed into the water to save the 375-pound bruin. He couldn't stand the thought of the poor animal drowning. 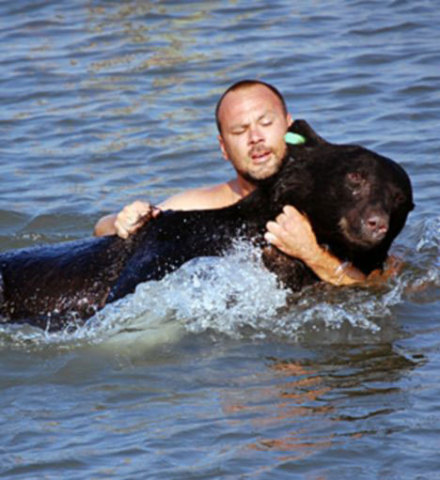 The bear began to lose its ability to move its legs, so it tried to climb on top of Warwick to keep from drowning. Now that is something that is really going to get the adrenalin running! In spite of that Warwick managed to remain calm and grabbed the bear by the scruff of the neck.

After what seemed like an eternity, Warwick made his way 25 yards through the Gulf and out of the water with the groggy bear. At this point the bear was having trouble keeping its head above water. Everyone on shore had been holding their breaths as they witnessed the spectacle of a lifetime. 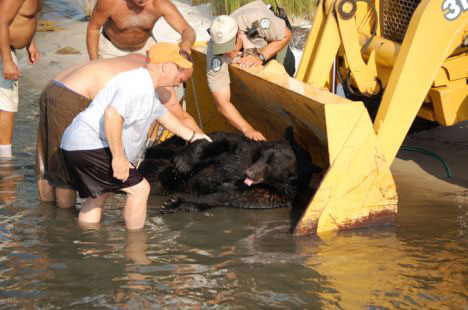 Local resident Thad Brett had watched the dramatic rescue unfold and went and brought his digger to the shore to carry the bear away. The bear was taken to Osceola National Forest and released.

For Warwick, he received a scratch from the bear, a cut on one foot from the barnacles, and a story to entertain future grandchildren with.