Man In Gorilla Suit Accidentally Shot By Vet At The Zoo

Zoos around the world stage escaped animal drills, but few of the drills
end in the drama that one did at the Loro Parque in Tenerife, the
Canary Islands. Earlier this month the zoo held just such a drill, but
somehow not everyone got the memo. This led to a somewhat comic episode
that could have ended in tragedy.

As with many zoos, one of the zookeepers (presumably the one who drew the short straw) is dressed up in a gorilla suit and then run loose in the zoo. The remaining zookeepers then pop into emergency mode to practice their emergency protocol and skills. 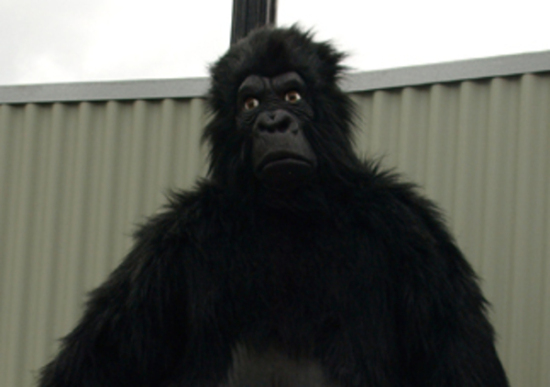 In this particular case one veterinarian had reportedly not been told about the mock escape and, upon seeing the man in the gorilla suit bounding around the grounds like some big, hairy ape, went and grabbed a tranquilizer dart gun. He then shot the wayward "gorilla" in the leg with enough tranquilizer to handle a 400-pound gorilla. That was far more than needed for the 200 pound man inside the suit.

The 35-year-old man, who had only worked for the zoo for two months at the time of the incident, suffered an allergic reaction to the tranquilizer. He was rushed to the hospital in serious condition. He is expected to make a full recovery.

While the situation was quite serious, there are certain comic elements to the story. First and foremost -- how does a veterinarian not know the difference between a real gorilla and a guy in a gorilla suit? I would think that part of the investigation in to what went wrong would include an eye exam for that doctor. They might also check and make sure that he didn't get his diploma online.

Funny
Mammals
News Stories
Weird, Odd or Bizarre
Wildlife
Batdog And Robin To The Rescue! The Animal Video Of The Day!!!

Why Dogs and News Anchors are Not a Good Mix -- The Animal Video of the Day!!!

Jet And Miri: A Love Story That Is All Wet

I Will Cut You! The Crab With A Knife Animal Video Of The Day!!!
Comments