Two years ago one very loving ginger mama cat found her litter of one
kitten expanded to five with the addition of four hedgehogs. With plenty
of milk to share the hedgehogs had found a warm, furry loving mommy to
care for them after the untimely death of their own mother. It must have
been a rather prickly situation -- at least at first. 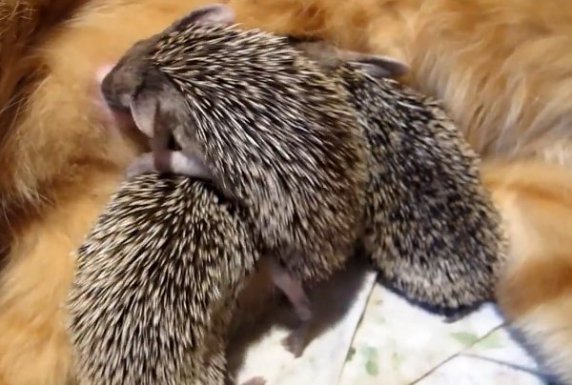 Sonya and her Baby Hedgehogs (You Tube Image)

As soon as the little hedgies were introduced to Sonya, the ginger tabby, they were immediately taken in as though they were her own kittens. Learning to groom her new litter must have been a bit of a challenge to make sure that she wouldn't impale her tongue on one of their spines, which are similar to the unrelated porcupine.

When mammal babies are orphaned or abandoned it is the usual practice to place them with a surrogate mother of the same species. Sometimes this is just not possible. Fortunately, the milk of mammals is fairly similar across the board so that if another species is willing it is the next best way of raising the orphans and works far better than bottle feeding.

No doubt there is no replacing that level of love and attention that the babies get from another animal than it can get from a human being.

This Holiday Dinner Has Gone To The Dogs! The "What's The Cat Thinking?" Animal Video Of The Day!!!
For You -- Unlikely Animal Friends
Product Review – Broderpress Animal Pillows
Funky and Fun Cat and Dog Cookie Jars
Comments