Making Whalers Extinct Versus The Whales? 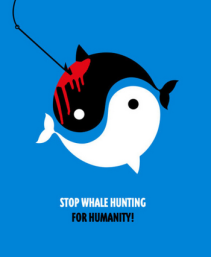 The tides are turning literally and figuratively in bringing the heinous act of whale hunting to an end. Conservationists are hopeful that their successful efforts in shuttering one commercial whaling shop in Iceland might be the first beacon of hope that their efforts will go world-wide, and that the final chapter of whale hunting might be in our foreseeable future.

Kristjan LoftssonWhile Kristjan Loftsson, director of Hvalur HF, Iceland’s largest whaling operation would like the world to believe he is closing shop this season due to difficulty in exporting the meat to the Japanese market, the truth go a little deeper than that. It seems that Japan requires chemical analysis for imported meat, which the head of Hvalur HF insists is “outdated” and refuses to carry out hunts for the Japanese until Japan adopts newer, modern research methods.

According to Whale and Dolphin Conservation, last year alone, Loftsson’s whaling company was reported to have killed 155 fin whales bringing his total to 706 since Iceland resumed commercial whaling in 2006.

Despite the company's drive to keep the hunt for fin whales going forward, it’s been plagued by a growing number of other problems from international opposition, political pressure, contaminated meat, trouble with shipping routes and a declining interest in whale meat all together.

Other countries support the end to whaling . . .

The global civic movement Avaaz ran two campaigns, backed by over a million people targeting some of Kristjan Loftsson’s other transport routes for fin whale meat.

The first, in 2013 Avaaz persuaded the Dutch government to block shipments of the meat coming into their ports. The second, in 2015 requested St. Kitts and Nevis to remove their flag of registration from ships used to carry the meat.

Thousands of Avaaz members also sent messages to German authorities and helped get whale meat returned from Hamburg to Iceland. They also posted calls to end the hunt on St Kitts Facebook page, as well as Icelandic members speaking out to RUV, Iceland`s biggest radio station, against whaling.

Danny AuronDanny Auron, Avaaz's campaign director said:  “This summer, Iceland’s majestic fin whales can swim safe from the threat of being murdered and butchered. Kristjan Loftsson was dead-set on continuing the hunt, but millions of voices from around the world joined together to disrupt his trade, and it worked. It looks like fin whalers are on the verge of extinction in Iceland, instead of fin whales.”

Norway is still hunting a greater proportion of breeding females which could put the long-term survival of minke whales in the North Atlantic in severe danger.

And Japan while refusing to accept whale meat from Iceland, the Japanese continue to hunt whale based on what they consider their country's long tradition. They see the desire of other countries and organizations demanding they cease operations is a direct threat to Japanese culture.

According to its defenders, eating whale meat is an old and impenetrable Japanese tradition. "No one has the right to criticize the food culture of another people," said Matayuki Komatsu of Japan's Fisheries Agency.

The world's support is behind the whale hunt ban movement, but more has to be done. Over 800,000 fin whales were killed last century, putting them on the red list as endangered species even today.

So while there is verifiable success in thwarting whale hunting out of Iceland and a global consensus growing that the practice should cease, should countries like Norway and Japan persist . . . or can we begin to believe that there is indeed a viable path to making whalers the extinct lifeforms and not their prey?

Here's The Poop On Penguin Poop
Mallacoota Koalas Saved From Australian Bushfires By 22-yr old
Dolphin Rescue! The Animal Video of the Day!!!

Decline In Menhaden Populations Threatens Survival For Other Fish
Comments