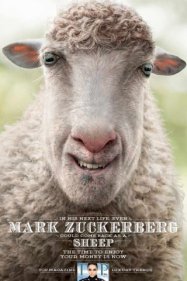 Brazilian luxury magazine, TOP has launched a brand new advertising campaign with a highly questionable pitch. With an assist from their ad agency, ALMAPBBDO (now, say that one, five times fast), this marketing approach has gone to great lengths to convince their readers and rich people in general -- that in addition to stopping and smelling the roses -- they need to spend their money wisely before it's too late?

The creative set of visuals developed for the campaign re-imagines three of today's wealthiest CEOs reincarnated into animals instead of the uber-rich entrepreneurs they've proven to be in their current lives. From Mark Zuckerberg coming back as a lowly sheep, to:

Bill Gates as an astute llama & Donald Trump as a wise old owl? 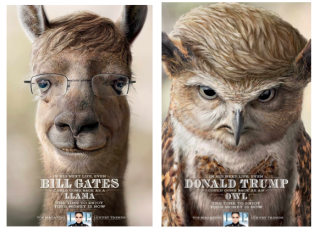 Bill Gates & Donald Trump. . .it's hard to say exactly what the magazine was trying to illuminate? While the illustrations are mesmerizing, it's not clear as to what message the publication is really trying to convey. For instance, the tag chosen for all 3 ads is: “The Time to Enjoy Your Money is Now," but there really is no reasonable explanation or insight provided as to why these particular animals were selected for these specific leaders of commerce.

The only metaphysical connection that made any sense to me was Mark Zuckerberg coming back as a sheep. In the 2010 graphic novel, Facebucks & Dumb Fucks, Mark Zuckerberg was portrayed graphically as a Pied 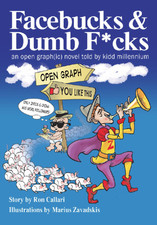 Piper of sorts leading his blind followers wherever he chooses to go.

And while those blind followers were illustrated as 'mice,' on the novel's book jacket, they could have just as easily been replaced with sheep who have been known to mindlessly follow their leader. From that perspective, there's at least some karmic justice that could tie Zuckerberg to this campaign. In one life you're the sheep herder, in the next you're the lowly sheep. But as far as the llama and owl depicting Bill Gates and Donald Trump, your guess is as good as mine? Reincarnation is a tough code to crack, don't you think?

Celebrity Pets
Fun Stories
News Stories
Technology
ALEX, The Parrot Who Knew What He Was Talking About
Her Name Is Olivia Poop & She’s A Fixer!
Simon's Cat in "Screen Grab" -- The Animal Video of the Day!!!

Which "Animal" Will Take The GOT Throne?
Comments