Remember the famous opening line, "Lucy, I'm Home!" from the classic 1950s TV show "I Love Lucy."  Well, Ricky and Lucy Ricardo were the inspiration for the names given to two African Great White Pelicans, and those two zany birds have actually followed in the footsteps of their namesakes. They're both comedic movie star actors who recently starred in the 2011 release of Dolphin Tale, alongside the now famous prosthetic dolphin named Winter.

But strangely enough, they both played the same role - alternating time spent in front of the camera, under the character name of "Rufus." While the birds were born in Florida, the owners signed them up with Birds and Animals Unlimited and moved them to the West Coast to start their Hollywood movie careers.

As experienced actor, Ricky and Lucy have also appeared in You Don't Mess with the Zohan, featuring Adam Sandler. Dolphin Tale is a dramatization of the story of Winter, the dolphin who lost her original tail in a crab trap and then relearned to swim with a prosthetic tail that was ingeniously designed by Sarasota-based prosthetist Dan Strzempka and Orlando-based Kevin Carroll.

In Dolphin Tale, Rufus terrorizes one of the lead character's poor mom (Ashley Judd). Pictured here, Lorraine is unsure about her son working at the Clearwater Marine Hospital and Rufus steals the scene by not showing her a warm welcome! 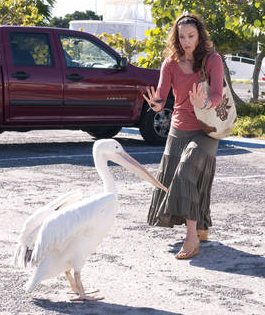 Ashley Judd as Lorraine in "Dolphins Tale"
A 41-second video can be found here.

Considering both Ricky and Lucy are only 7, they are looking at a potentially long film career as they can live well 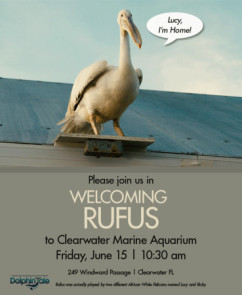 Rufus (aka Ricky & Lucy)into their 60s. Now officially housed at the Clearwater Marine Aquarium, the pair are attracting large crowds of fans that are familiar with the movie that was filmed there.

While the birds decide on their next film assignment, for now, the aquarium is focused on giving Ricky and Lucy a home. (giving a whole new meaning to that famous line from "I Love Lucy.") Residing at the aquarium, they also will make appearances at Winter's Dolphin Tale Adventure, an exhibit of movie props and re-created scenes in downtown Clearwater's Harborview Center.

By the way, unlike their show business namesakes Ricky and Lucy Ricardo, this Ricky and Lucy are not a couple. According to the Aquarium's CEO David Yates, "they're just friends!" 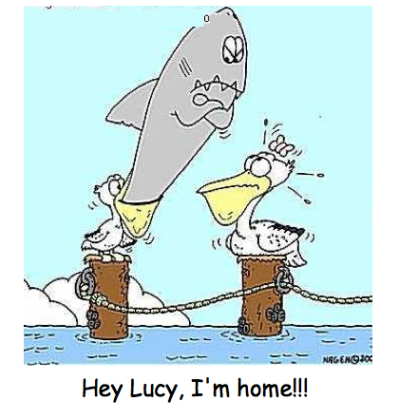 The World's Deepest-Living Fish -- The Bizarre Animal Video of the Day!!!

Drinking Problem? Cats Versus Dogs in the Slow Motion Animal Video of the Day!!!
Comments