You surely remember the old grade school joke: "Why did the chicken cross the road?" and it's obvious response: "To get to the other side!" Well an actual real-life occurrence took place in Toronto recently - but this time with ducks.

Here you'll find, not your every-day duck crossing. A very brave mother duck and her 9 ducklings were captured by a CNN helicopter film crew in a nail-biting journey across a very heavy-trafficked

five-lane Toronto interstate. This footage provides a "birds-eye" (pun intended) of that harrowing trek. After their mother leads them through a hole at the base of a  cement barrier, they shuffle quickly into "goose-step" (again pun intended) into the fray of traffic.

As you can see from the above video, after a lorry rattles past, the ducklings retreat in fear only to have their mother waddle back to them, apparently to give them a pep talk on courage and the reasons why they need to reach the other side. They then quickly regain their (webbed) footing to queue up once again. 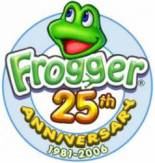 Many have reported that their treacherous journey of dodging moving vehicles is reminiscent of the 1981 game of Frogger - with the caveat: fortunately these ducks were able to complete their journey on the first go. In Frogger, we all remember how many times we were bumped off, before we were able to come up a winner!

in this vid version, for theatrical effect, YouTuber "scream261" adds the Frogger music to the now-infamous crossing.

So glad Mother Duck innately knew the rules of the road, and didn't come to the same fate as one other famous duck  --- who was not so lucky! 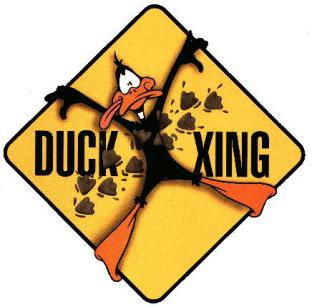