Employees of the Mill Road Vet Clinic in New Zealand got a big lesson in
love last week after they took in an abandoned litter of kittens that
were only three or four weeks old. While kittens are enough to give you a
serious case of the awwwwwws, it was what came next that was the real
story. The kittens and their mama cat were reunited in an unusual way. 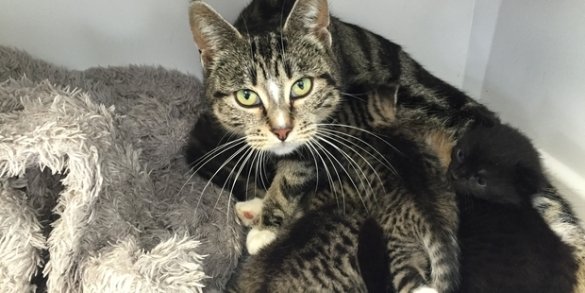 Mama Cat and her Kittens (Image via I Heart Cats)

The employees were surprised to find a box of kittens on the doorstep one morning with no mother cat in sight. They set the kitties up in an incubator to keep them warm and fell in love as they did so, according to Dr. Julie Willa, DVM. Rather than taking the tiny tabbies off to the SPCA they decided to take care of the kittens until they were old enough to be adopted.

A day later a small tabby cat showed up at the door of the clinic and kept trying to sneak inside every time the door opened. She was even willing to try when there were dogs present. The staff was baffled by this behavior until the cat finally made it inside.  When someone picked her up it was discovered that she was a lactating mother. That was when inspiration struck. 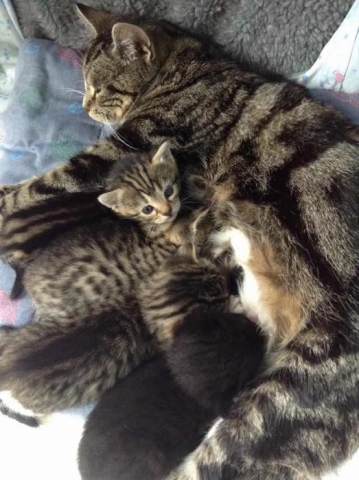 Mama Cat and her Kittens (Image via HNGN)

They introduced the cat to the kittens and, sure enough, they were her kittens. Suddenly life was good for all the felines again. The purring was probably deafening. Hopefully they will all be adopted together.

Mama cat, like all cats, needs to remember that we humans can be a little slow on the uptake.

Enough With The Ice Buckets -- It's Time For Pies 4 Paws